The 6th June 2019 was the 75th anniversary of the 1944 D-Day Landings. To mark this important moment we launched a ‘75 Reasons To Thank Our Normandy Veterans’ campaign to secure £250,000 funding for a national garden tribute and we asked the British public to help us raise £25,000 of this by way of public donations. 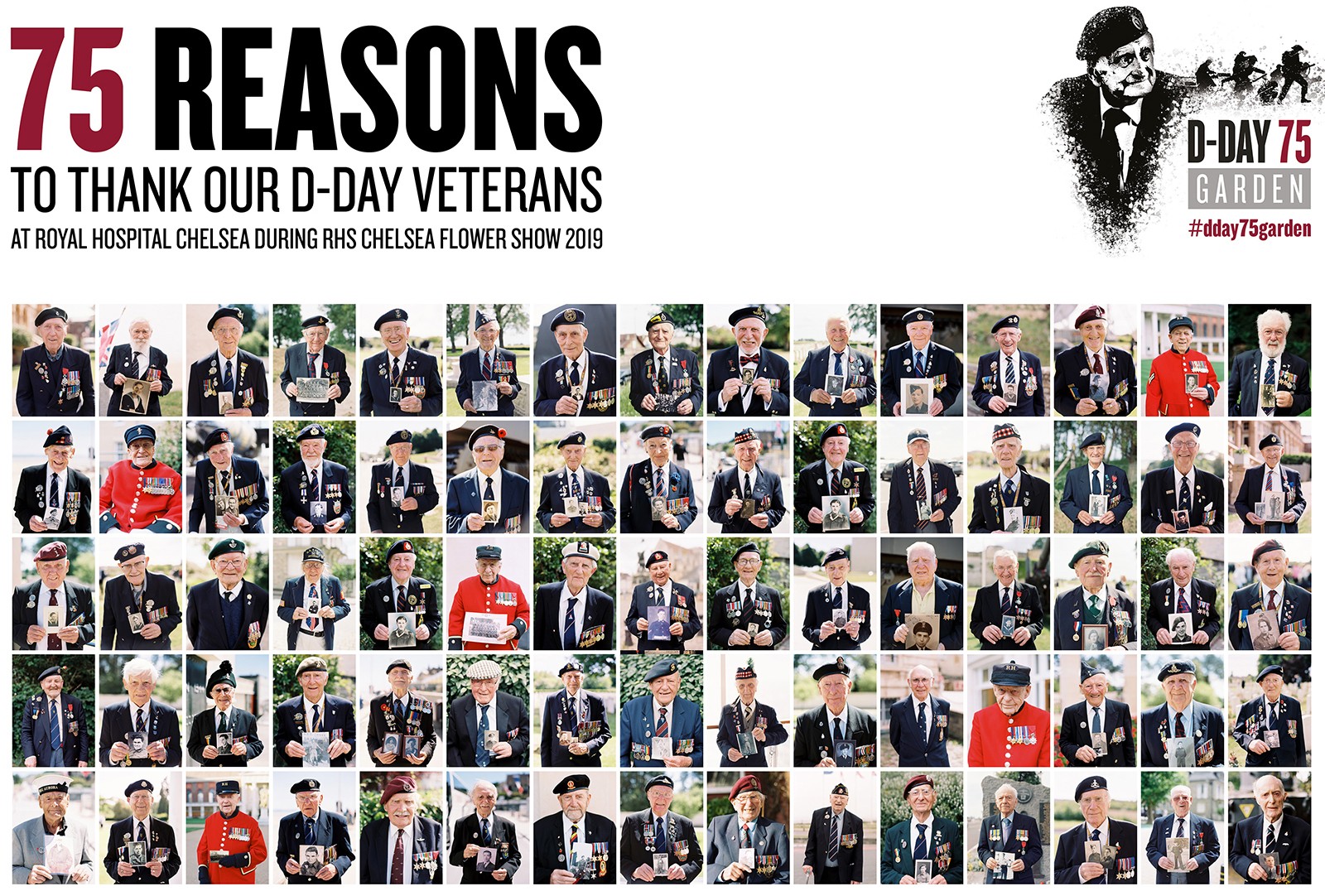 The ‘D-Day 75 Garden’ was exhibited at the Royal Hospital Chelsea during this year’s RHS Chelsea Flower Show, 21st-25th May to celebrate the lives of our Normandy veterans; 75 of whom were invited to take part across the week and share their incredible stories with the Chelsea pensioners and the public.  It was then gifted by the veterans to the town of Arromanches, Normandy in a ceremony on 6th June 2019. 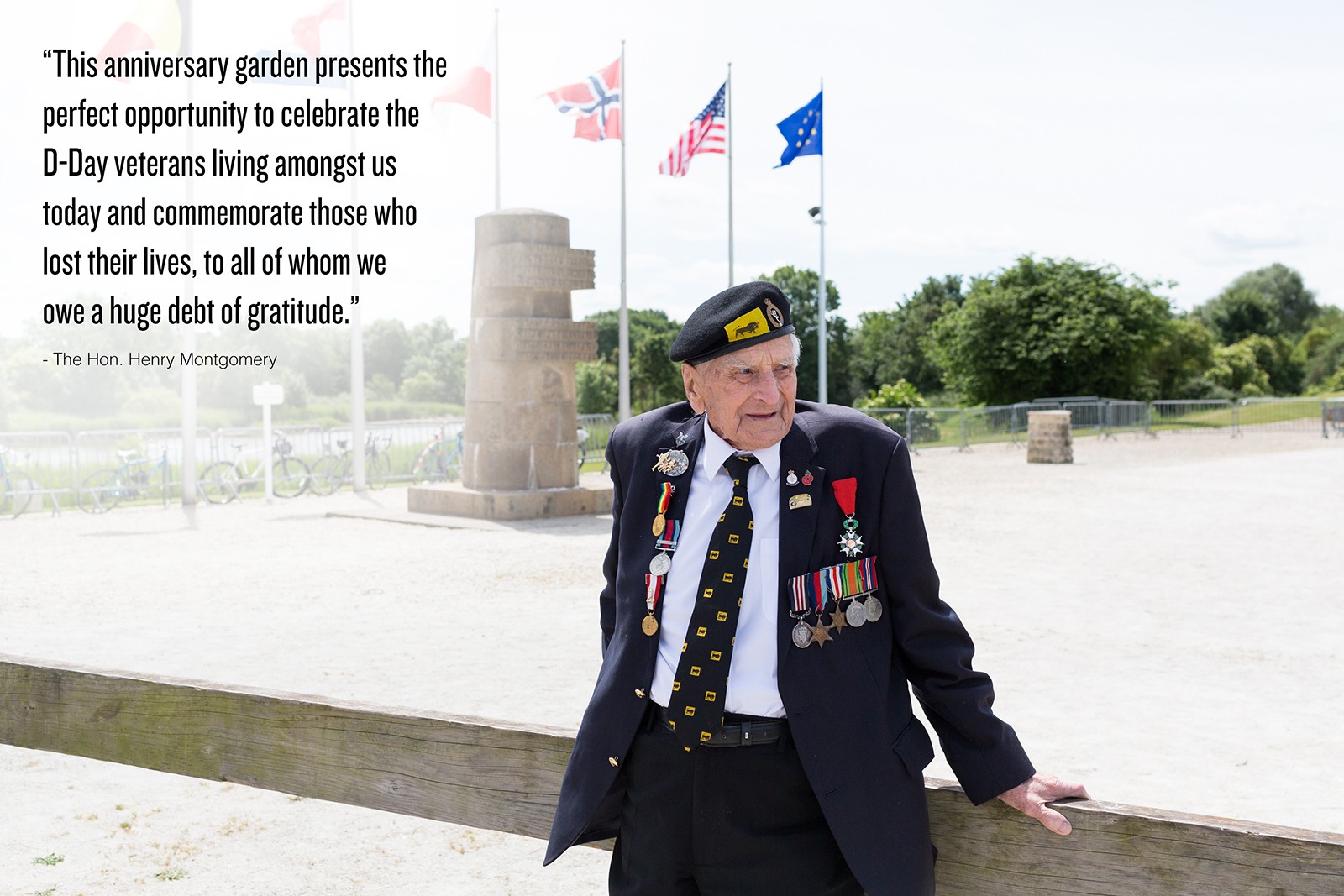 With surviving veterans now approaching 100 years of age, this was a final opportunity for the nation to express their gratitude and ensure a lasting legacy to these valiant men and women.

11th Armoured Division veteran Bill Pendell MM was chosen by D-Day Revisited to represent the Normandy veterans in this garden tribute and he was so looking forward to attending the Chelsea Show in May.  Sadly this was not to be as Bill passed away 1st December, aged 97.  His loss called into focus the diminishing time we have left with our wartime generation and strengthened our resolve to make this garden a reality in his memory. 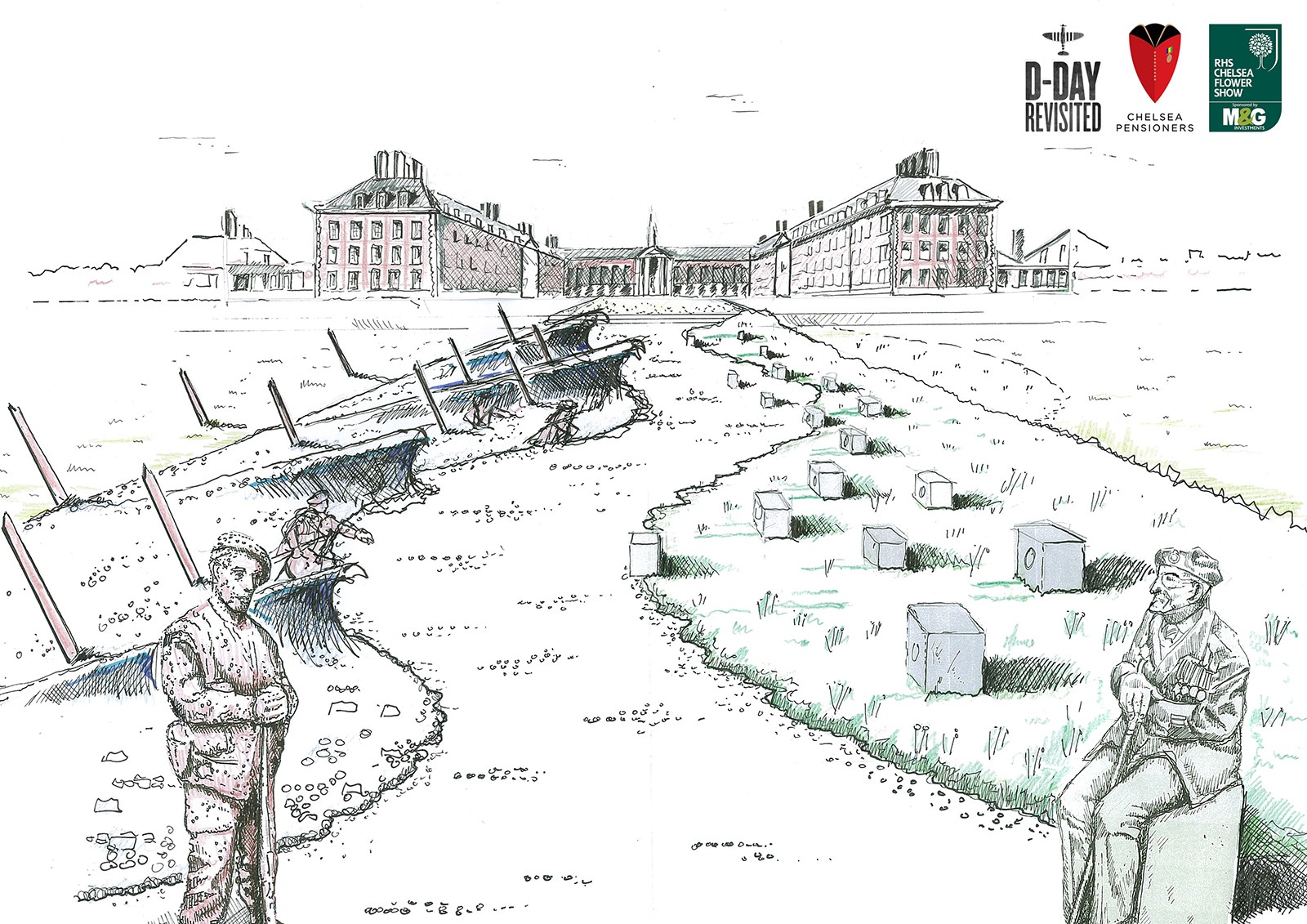 75 REASONS TO THANK OUR D-DAY VETERANS

The ‘D-Day 75 Garden’ was budgeted to cost £250,000. This sum included the build, relocation to Arromanches, Normandy and accommodation, travel & hospitality for 75 veterans, their companions and essential medical support volunteers in London during the Chelsea Show.

The charity is thrilled to report this figure was met by enthusiastic national support through a combination of public donations, business and government contributions. 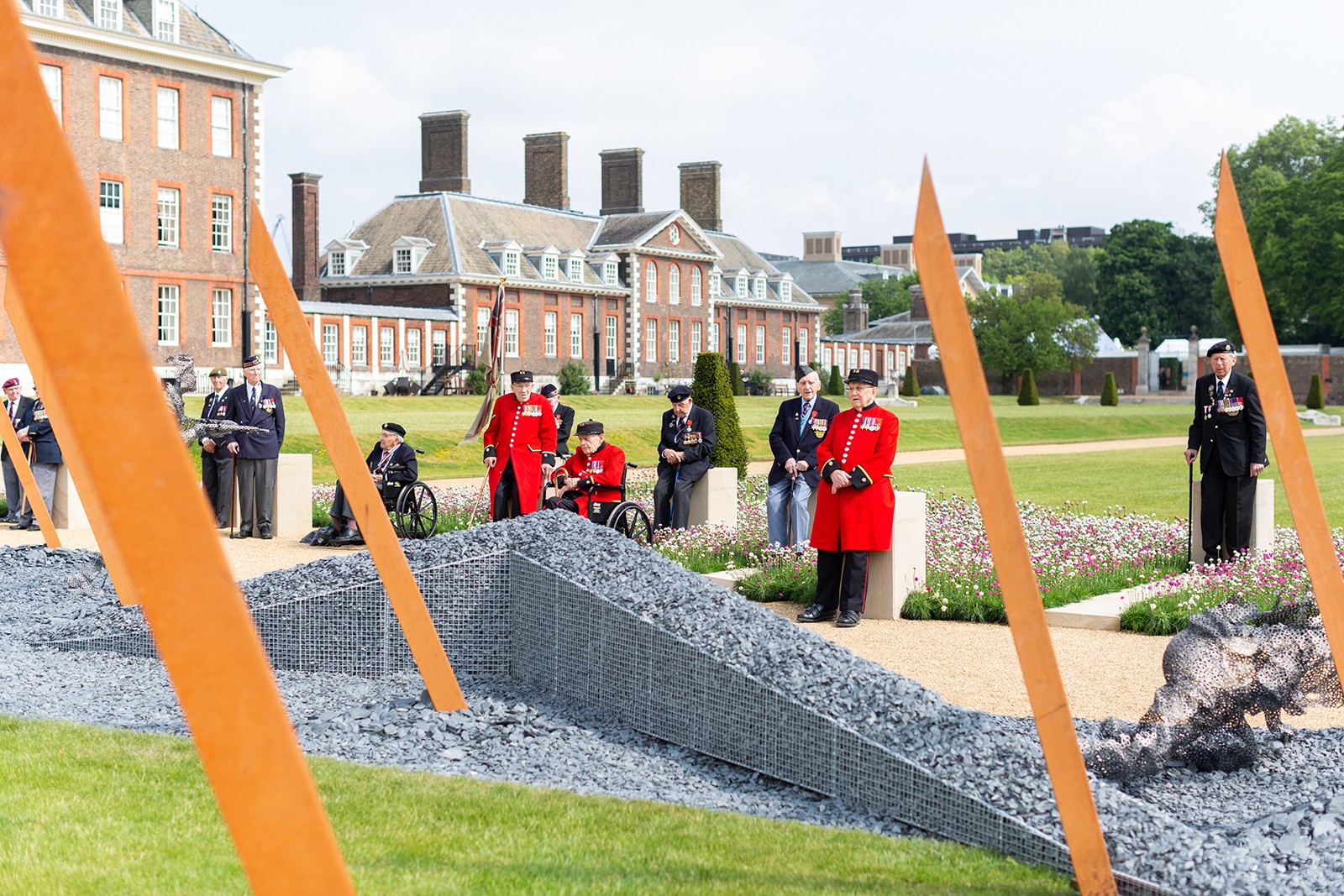 Two life-size sculptures bookmark the entrance to the 32m x 12m ‘D-Day 75 Garden’ and narrate the scene which unfolds behind them.  To one side a veteran modelled on Bill Pendell MM sits on a stone plinth proudly wearing his medals and beret.  Hand carved from a single block of Millstone Grit, he looks across at an ethereal image of himself as a 22 year old, constructed from thousands of individually welded metal washers. The young figure pauses before rushing up the beachhead, with fellow comrades struggling to get ashore behind him.  Four waves break on the beach through a series of Cor-Ten steel angled poles, designed to represent ‘Rommel’s asparagus’ placed by the occupying forces to ensnare landing craft.

In this moment the 75 years which separates one man from another is bridged and visitors are invited to consider how it must feel for veterans to reflect on the intense experiences they endured on D-Day and the days that followed. 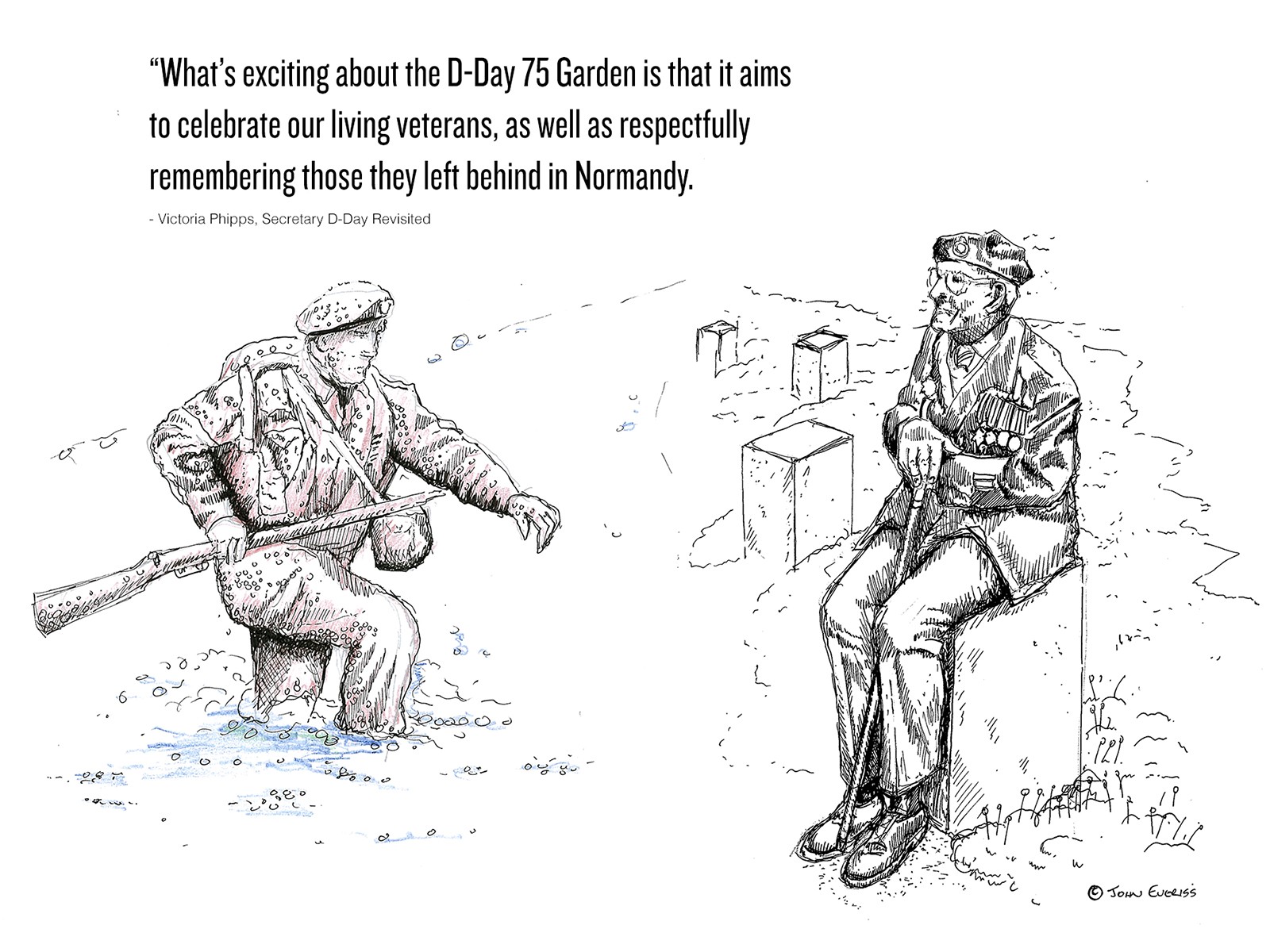 Beyond veteran Bill, a further 15 stone plinths stretch out towards the Royal Hospital Chelsea.  Each day 15 veterans were invited to engage with the garden and sit beside Bill for a moment; looking back at the scene of young soldiers. Here they were surrounded by a carpet of 10,000 Armeria maritima plants (’sea thrift’), which would have been seen by the troops as they embarked along the south coast of England and again as they pushed inland off the Normandy beaches.

In this moment the 75 years which separates one man from another was bridged and visitors are invited to consider how it must feel for veterans to reflect on the intense experiences they endured on D-Day and the days that followed. 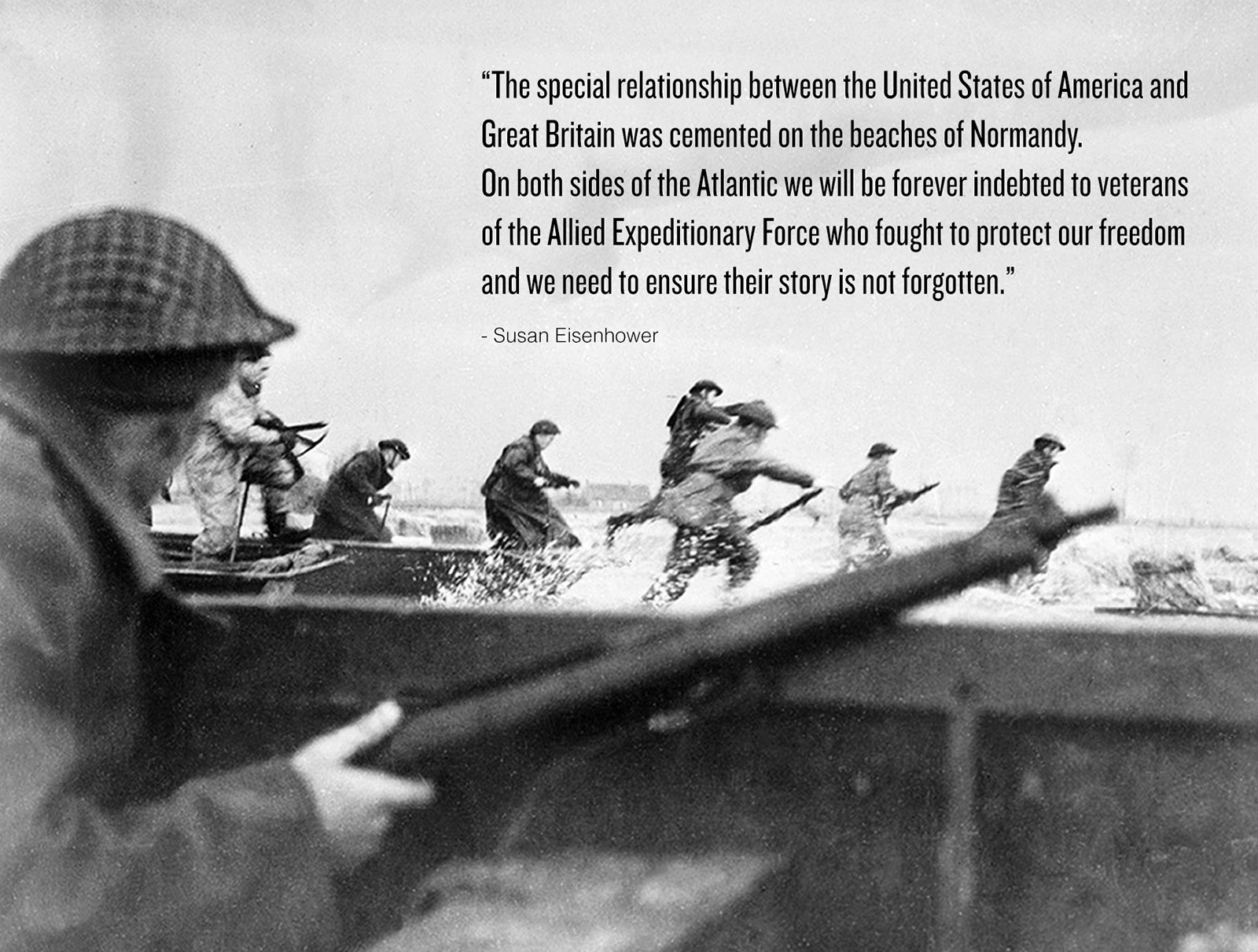 Codenamed ‘Operation Overlord’, the D-Day Landings on Tuesday 6th June 1944 remain the largest seaborne invasion in world history with over 6000 ships and assault craft.  Nearly 160,000 men of the Allied Expeditionary Forces landed on D-Day, consisting primarily of British, American, Canadian and French troops, but also including soldiers, sailors and airmen from across the free world. A total of 875,000 disembarked onto the shores of Normandy by the end of June.  The operation marked the beginning of the end of war in Europe.

In Arromanches the ‘D-Day 75 Garden’ provides fitting and lasting tribute to Bill Pendell and his pals.  Bill was a generous and modest man, with a twinkle in his eye and an enormous zest for life which was truly infectious.  We are proud to have known him and, with the help of his daughter Fay Pendell and his best friend Joe Cattini, to have been able to tell the D-Day story from his point of view in a way which we hope will inspire future generations.

We thank you for your support… #dday75garden