In April 2016 D-Day Revisited took on a genuine wartime Motor Anti-Submarine Boat (MASB or MA/SB) and moved it by road to its current location at Hawarden Airfield, just outside Chester.  Our aim was to restore it to its former glory in time for the 75th anniversary of D-Day in 2019, so it could join fellow Coastal Defences veteran vessels in its first cross-Channel journey to Normandy since the war! 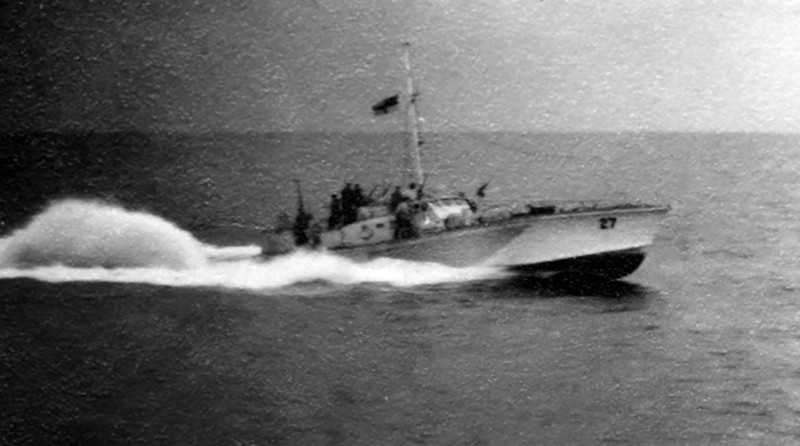 MASB 27 on exercise along the British coast during WWII

After months of research, our ‘spare-time’ restoration project began in November 2016. The boat was little more than a hull, full of debris, with several internal bulkheads and a small area of original decking. The restoration to proper wartime seaworthy condition was scheduled to take 2 years, aiming for practical completion by the end of 2018. Lifting into the water was planned for early 2019, to undergo extensive sea trials before its historic journey back to France in June 2019.

To the best of our knowledge no other Royal Navy Motor Anti-Submarine Boat has been restored and only one other salvageable vessel exists.  Now completed this is the only surviving MASB in the world restored to wartime condition.

1940
Ordered by the Admiralty in a batch numbered 22 to 32, MASB 27 was laid down by the British Power Boat Company Ltd. as a 63ft long Motor Anti-Submarine Boat.

1941
Commissioned into the Royal Navy.

November 1945
Purchased by Lt Cmdr (retd.) John Humphrey Yorath. Its engines and fuel tanks were removed and it was converted to a houseboat for static private use on the Sussex coast.

Early 1980s
Sold by Yorath family to Russian power boat enthusiast. The boat was stripped of superstructure for conversion to motor yacht.

1988
Purchased by Jonathan Eastland. A freelance journalist & historian, Mr Eastland further converted MASB 27 into a houseboat and lived aboard in the Hamble River area for many years.

2012
Sold to Owen Childs with a view to restoration. The boat moved by road to Watchet Harbour in Somerset.

The story began 100 years ago on 20th September 1916, when Hubert Scott-Paine incorporated the Supermarine Aviation Company Ltd. in Southampton.  Scotty’s passion was flying boats and in 1917 a new draughtsman was taken on: Reginald Joseph Mitchell, who of course went on to achieve immortality as the creator of the Spitfire.

Although Supermarine developed world beating flying boats, winning the coveted Schneider Trophy, Scotty’s new passion was for fast motor boats. Later in wartime, these boats became known as the “Spitfires of the Sea”. Built of strong but lightweight construction, powered by huge engines, the MTBs, MGBs, MASBs and HSLs raced through high seas at speeds up to 45 knots.

Built by the British Power Boat Company Ltd., MASB 22 was part of the same batch ordered by the Admiralty in 1940

In this restoration, to save a unique MASB is to save a piece of British engineering history. During research of this period in the 1920s & 30s, iconic names regularly appear; just as Henry Royce went ahead with his Merlin engine under the enterprising title of PV-12 (private venture/12 cylinders) so Scott-Paine similarly set about spending his own money on a new gunboat identified as PV-70 (private venture-70 ft).

What followed was the building of MTBs (Motor Torpedo Boats), MGBs (Motor Gunboats) and MASBs which were fitted with the latest ASDIC equipment for protection of estuaries and coastal waters. As the RAF became interested in Air-Sea Rescue boats, they sent Aircraftsman T.E. Shaw to work on development; better known as Lawrence of Arabia. 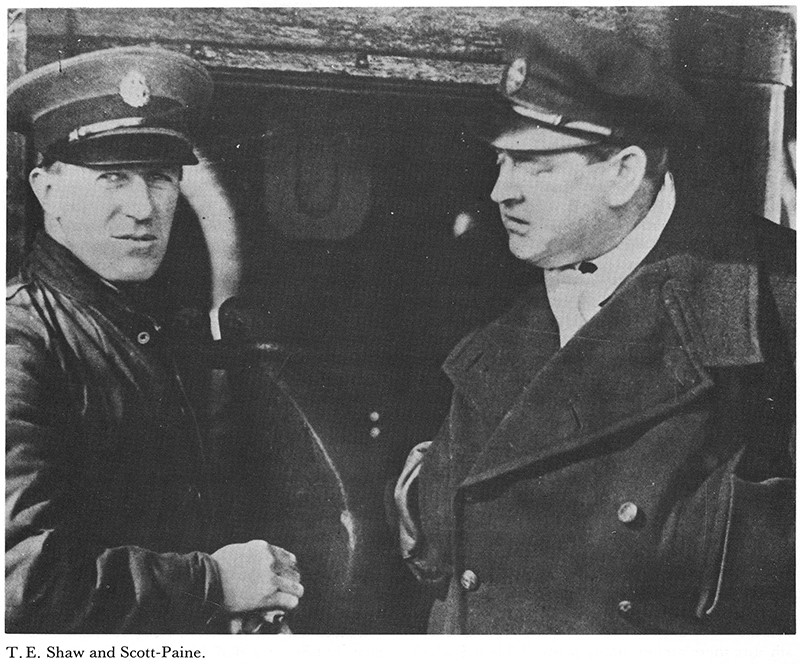 Research into MASB 27’s wartime service uncovers the amazing story of British enterprise, engineering ingenuity, determination and courage. This was a time when Britannia ruled the waves, but was to be supremely tested.

In 1939 just as Poland was being invaded, Scott-Paine left for America where he met with President Roosevelt who promptly committed $5 million for U.S. industry to adopt these advanced designs which became known as PT (Patrol Torpedo) Boat. It was PT-109 whose skipper was John F. Kennedy, later to become the 35th President of the USA.

As War progressed, the expected threat from enemy U-boats acting in coastal waters did not materialise. No longer required for protection of ports and estuaries, most MASBs were converted to MGBs or redeployed to Air Sea Rescue. For its part, MASB 27 was commissioned from the Hythe Yard of the British Power Boat Company in 1941 and went into busy and mixed Royal Navy service. 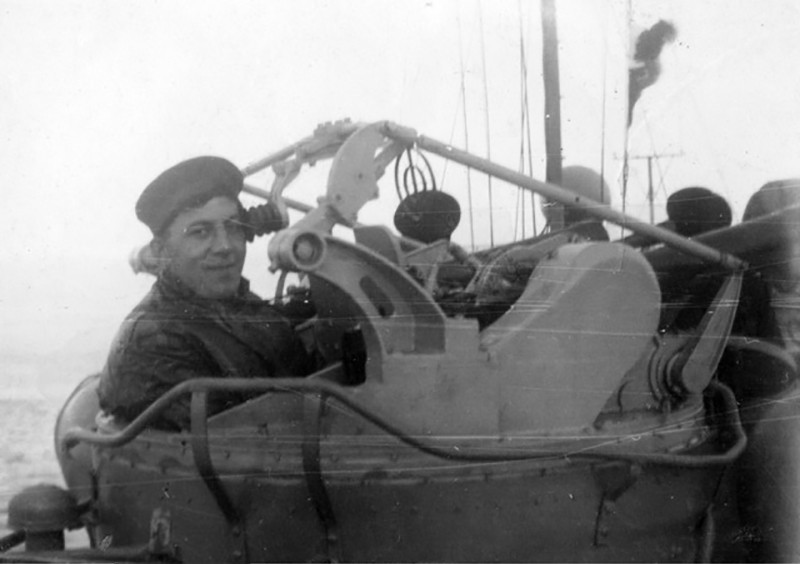 A B Gunner Ernest Barnard in the turret of his twin 0.50 cal Vickers Machine Gun on MASB 27

A deep search has uncovered the secret story of MASB 27; that as well as air/sea rescue duties, it spent much of its time between Cornwall and Brittany on clandestine operations. Under the direction of the Special Operations Executive, she was engaged in dropping agents into France and collecting RAF crew members assisted by the Resistance. 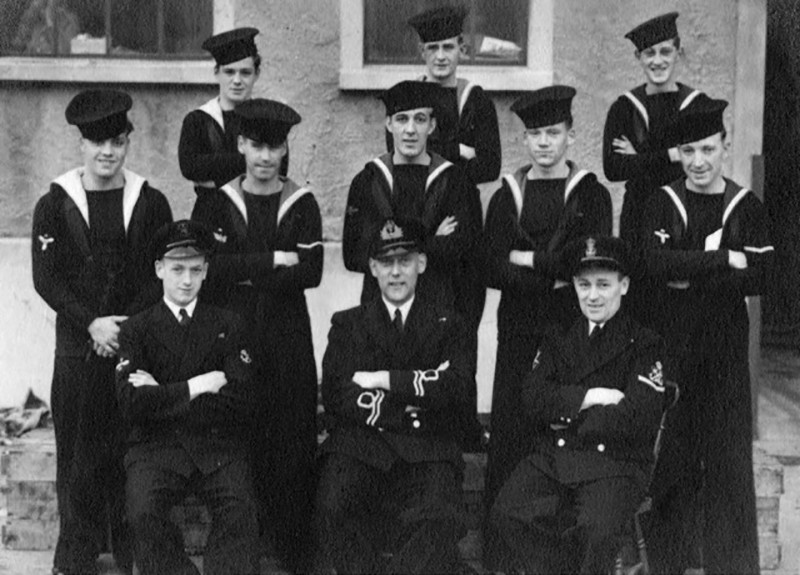 For D-Day Revisited, the historical significance of MASB 27 is its part in the Normandy Landings of 6th June 1944. On the early morning of D-Day, research indicates that the boat was part of the Coastal Forces squadron engaged in support of the US 1st Division in its assault on Omaha Beach. After the beachhead was secured and troops could move inland, MASB 27 remained in that area using its ASDIC to direct construction of ‘Mulberry A’ which was the artificial harbour established off Omaha. This area of the coast was hit by a rare force 7 storm 19th-22nd June, which sadly caused so much damage to the American harbour the Allies were forced to abandon the installation.

After its war service, like most timber gunboats, MASB 27 was sold off to become a houseboat. All armaments were removed. Oddly too, the three 24 litre Napier engines were taken out. In most cases, gunboat engines had been supplied by Packard under the Lend-Lease Agreement with the United States, and were duly returned after hostilities. 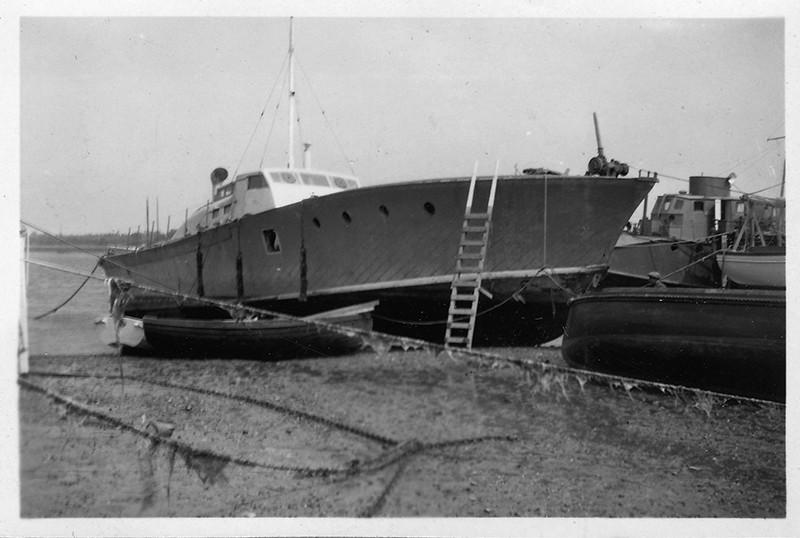 Many of these boats were scrapped in 1945; some used as target boats for gunnery practice. The story shows that MASB 27 narrowly survived the scrap yard in 1945 and again in 1986/87. Alongside this, she survived war service; perhaps we have a lucky boat.

After the death of John Yorath in 1980, his family sold the boat to a Russian enthusiast whose ambitious plan was to convert the boat into a luxury motor launch. Work was commenced by Hamble Yacht Services, removing the military superstructure and changing much of the interior layout. Work reached a stage at which the new owner ran out of money, leaving the boat to be repossessed to settle debts.

The old gunboat was offered for sale, now in a deteriorated condition. After a couple of years, journalist Jonathan Eastland made what he called a ‘reluctant purchase’ with a view to carrying out a restoration. For the time being he converted her into a habitable houseboat once again and that was how she remained for twenty years.

Acknowledging that restoration plans were beyond his capability, Mr. Eastland sold the boat to Owen Childs who moved it to Watchet Harbour. Although some work was carried out towards a restoration, once again the project was judged too daunting and costly so in 2016 D-Day Revisited purchased what remained of MASB 27 for a total restoration. At 75 years old, the good news is that the boat had a sound hull. Originally built in double diagonal Honduras mahogany, the structure survived remarkably well.

The plan was to restore MASB 27 to its wartime condition, perhaps to last another 75 years. The hull was refurbished externally and internally. A new superstructure and deck were fitted to match the original, using historic MoD plans and 1940s photographs.

Original Napier Sea Lion engines were W12 in geometry, with a swept volume of 24 litres. Each could produce 550 horsepower for short periods, more comfortably 500 HP in maintained cruise. Three of these engines were installed in 27 – giving a total maximum output of 1650 HP. To replicate this, from their Darlington factory Cummins are providing three straight six turbodiesel marine engines, each capable of a matching 550 HP.

Weapons were sourced to match the original Vickers and Lewis guns, although of course de-activated replicas. A rear deck-mounted Oerlikon ‘Pom-Pom’ was included in a late wartime re-fit, but this was not be matched in the restored specification. The plan was for MASB 27 to once again become a proper seaworthy vessel.

Once housed safely within the secure estate at Hawarden Airfield, work began in repairing patches of hull damage caused by wet rot. New mahogany boarding was used to match original timbers and most of the original structure was saved and treated for extended life.

The primary engineering cost was purchase of the three Cummins turbodiesel engines. Including marine accessories and transmissions, this was the biggest single cost at £125 000. Including purchase, accumulated costs are expected to total £400 000, a lower than expected figure mainly due to donated, skilled labour. Happily, the covered working area at Hawarden has been donated free of charge for the duration by the site owner. Specialist engineering skills are available at the AIRBUS Estate from the primary company supporting ‘D-Day Revisited’, with mostly free-of-charge utilities and office facilities.

The only significant fundraising activity was carried out at the Goodwood Revival in September 2016. This raised £75 000, all directed to the restoration project. 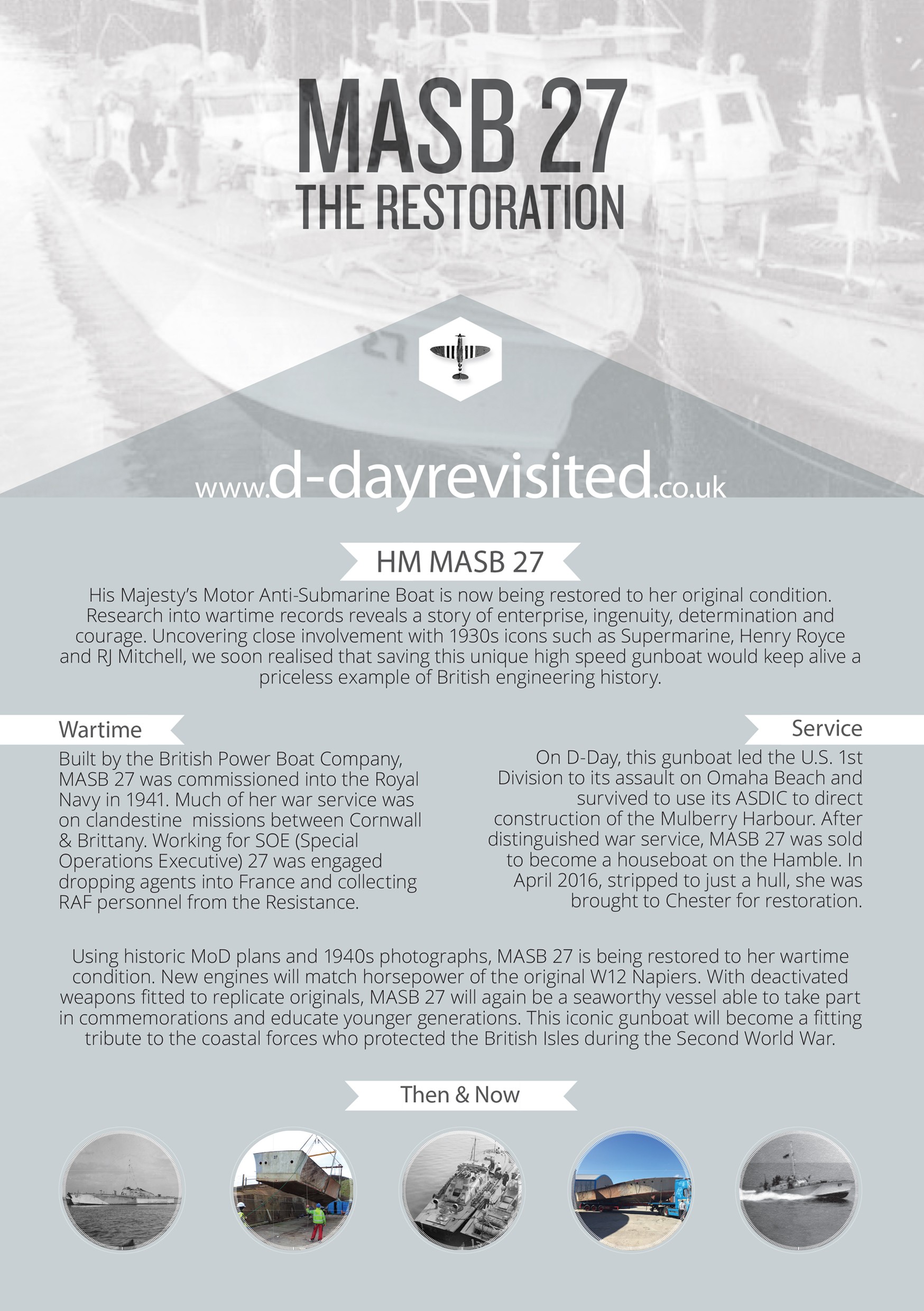 MASB 27 returned to Normandy in June 2019 in tribute and took part in several commemorative events amongst fellow Coastal Forces vessels. 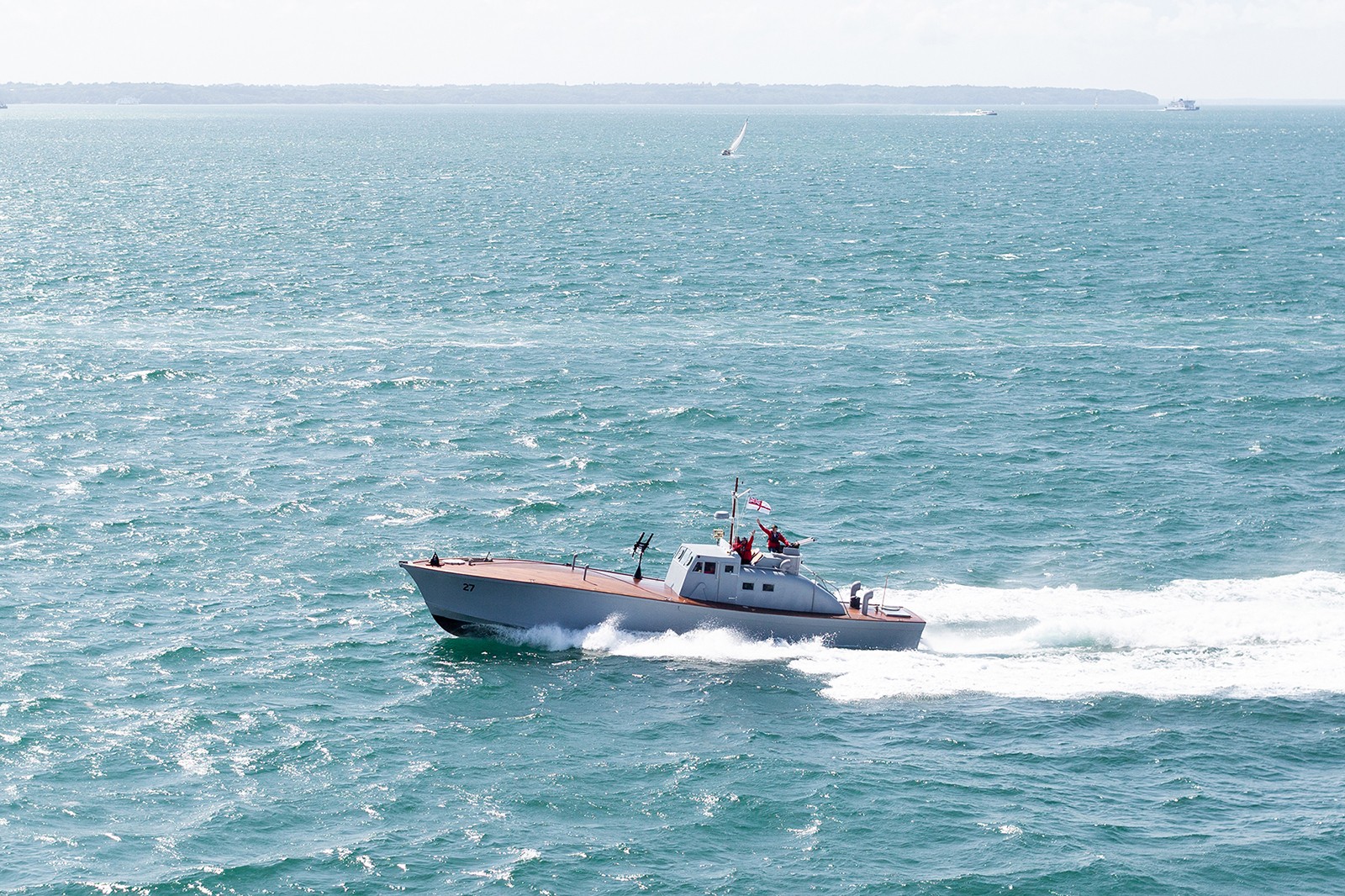 MASB 27 is now the “Surviving Veteran”: a tribute to the wartime Coastal Forces and those who protected the British Isles when under threat of invasion. As a finished vessel there is opportunity for young cadets to learn seamanship on a veteran craft.  Now located on the south coast, it will undergo regular maintenance and hopefully spend some time travelling around the UK where it can be used as an educational tool, further spreading awareness of the D-Day story.

Thanks to the Jaffe family, Mike Barnard and Richard Etchells for kindly allowing us to use their photographs here to tell the fascinating story of MASB 27.