On the morning of 4th June 2010 the D-Day Revisited group left the Northwest on three coaches bound for Normandy. The group consisted of 76 veterans, 30 carers, 18 wives/girlfriends, 3 paramedics, 3 nurses, 6 serving Paras, 3 coach drivers, 1 piper, 1 drummer and 8 members of the D-Day Revisited support team. Veterans came from North Wales, Chester & Wirral, Liverpool, Lancashire, Derbyshire, Cumbria, Weston super Mare & Edinburgh. Some had landed by parachute, some in gliders and of course the majority by sea… a little queasy from the journey and keen to wade ashore!

Included in the party are several other veterans who served in varying theatres of war and these were equally welcome. There is no doubt the D-Day Revisited group was the largest group of WWII veterans in Normandy in 2010. For many it was their first trip back to Normandy and being amongst so many fellow comrades made for quite a moving and emotional experience. 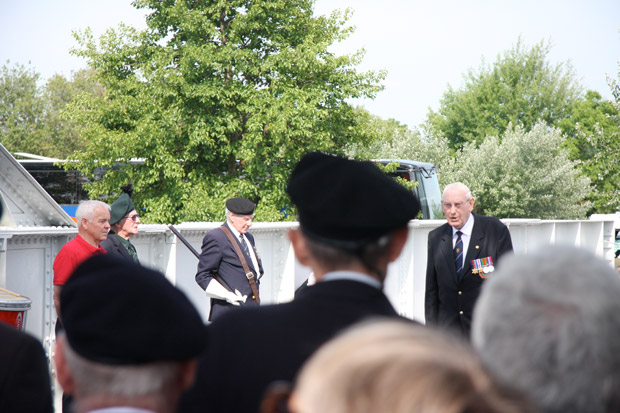 On the morning of Saturday 5th June the entire group visited the well-known paratrooper site at Pegasus Bridge. Those who wished to parade along the bridge did so in an impromptu parade (we soon learned that when you have a group of over 70 British veterans in Normandy, you can pretty much parade when and where you like!), led by volunteer drummer, Will Crawford, and piper, Karl Wainwright. Once the contingent was assembled on the bridge, we held a small ceremony of remembrance. 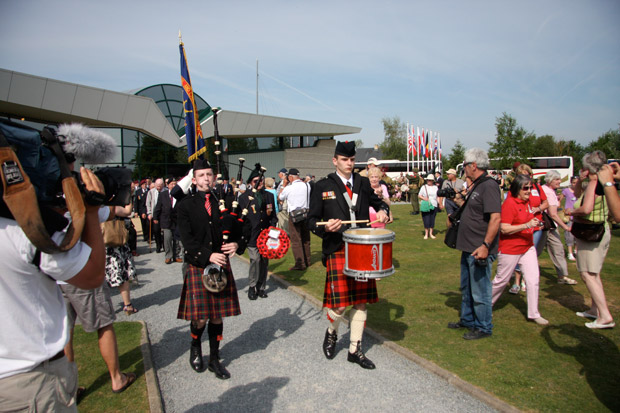 After the exhortation had been said, and the standard had been lowered for a moments silence, the piper played a slow, respectful rendition of Amazing Grace. One by one, the veterans tentatively joined in the song. The whole area was silent, save for a group of veterans who had travelled hundreds of miles to be there and remember those they left behind 66 years ago. It was an exceedingly moving moment which could not have been captured on film, but will stay with those who were privileged enough to be there for a long time to come. 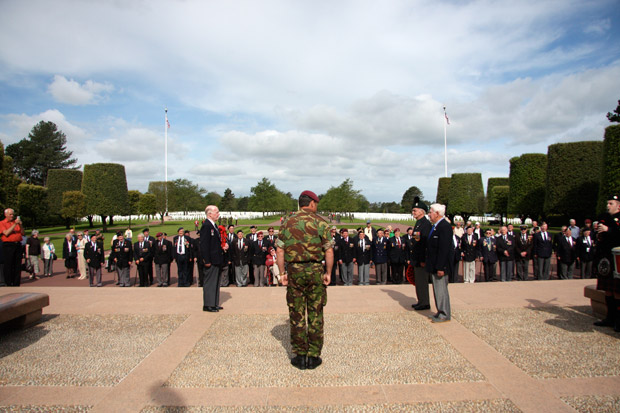 British Veterans remember their fallen comrades at the American Cemetery

We quickly learned that being alongside such a large group of British veterans in Normandy opened doors. Having an American veteran amongst us, named Sergeant Ryan, was also very handy when we visited the American Cemetery early on the 7th of June! Within minutes of arriving at the cemetery he had arranged a small ceremony of remembrance and cleared it all with the powers that be. The ceremony was very moving and amazingly just as our moment of silence was coming to an end a Dakota sporting the D-Day stripes flew directly over our heads!

The majority of the group had not visited the American cemetery before, and Bill was proud to play host to his British comrades in this beautiful cemetery.

AN THRILLING TANK RIDE AT SAINTE-MRE-GLISE

On Monday 7th June, our group was given a very warm reception at Sainte-Mre-Eglise. Each member of the group was presented with a certificate by the Muse Airborne in gratitude for all they sacrificed in liberating Normandy 67 years earlier. For a couple of veterans, including Wally Stockley, the event took quite an exciting turn 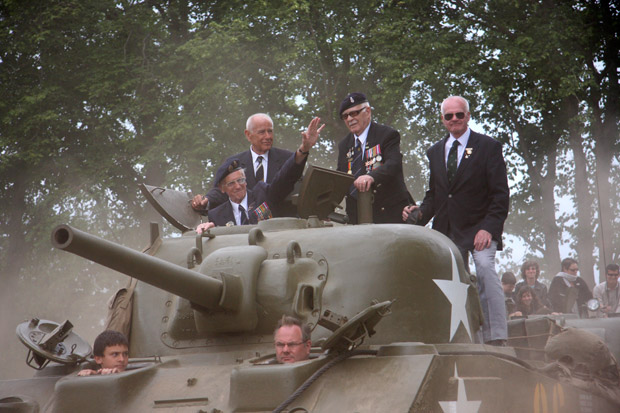 One of the organisers approached D-Day Revisiteds secretary, Victoria, asking if any of the veterans would like to ride on a Sherman Tank! To be quite frank, its not in our nature to be overly concerned by health and safety restrictions, but this was one of those occasions when the insurance fine print came to mind! However, she was assured it would be perfectly safe and so, feeling quite sure that none of the veterans would feel up to a high-thrill ride on a Sherman tank, she asked around.

When she approached Wally and his group of pals there was a bit of huffing at the idea, until Wally turned to her and calmly said, Yeah OK, where do I go?. So he and a couple of other veterans made their way over to the tanks

His wife and daughter looked on in amazement as, at the age of 85, Wally stood on top of a Sherman Tank as it careered round this field throwing up dirt and dust all around it!

As he stepped down, he was keen to speak to the Chairman of D-Day Revisited, John Phipps, to tell him that looking back hed ridden on every type of vehicle which operated during the war, from lorries to bren carriers, but he’d never had a go on a tank. Now at last he could tick this off his list!

The 66th anniversary pilgrimage was a massive undertaking. Overall it was a great success with a good balance of respectful remembrance and moments of fun and laughter. However being such a large group had its advantages and disadvantages. We all felt the trip had been more stressful for veterans and organisers alike, and so agreed to limit the group to 100 in future.