On the morning of 2nd June 2011, two coaches, 49 veterans, 16 wives/girlfriends, 12 sons/daughters, 2 paramedics, 2 nurses, 2 serving paratroopers, 1 piper, 1 drummer and 10 helpers departed the North West of England for Normandy! There were some familiar faces and many new ones, but it didnt take long for everyone to get to know each other.

In a slower pace this year, there was a timely and comfortable overnight stay in Southsea. All dined together at the Queens Hotel and Jim Ross took to the floor on behalf of “D-Day Revisited” with a few well chosen words of welcome. Refreshed, there was ample time for a visit to the Portsmouth D-Day Museum before boarding the afternoon ferry to Ouistreham. The veterans were made very welcome by Brittany Ferries, as usual, and enjoyed a calm crossing in fine weather. A fitting wreath laying ceremony was arranged with permission of the Ships Captain. Conducted mainly by Merchant Navy Veteran, Alan Morton, the ceremony was well attended and appreciated.

During a stay of four days, the party visited several iconic places of interest, such as Evrecy, Pegasus Bridge, the Caen Memorial Museum and Sainte-Mre-Eglise in the American Sector. In response to a request from one of the Royal Navy Landing Craft Veterans, a group visit was made to the Museum of the Atlantic Wall Le Bunker, at Ouistreham. Despite the seemingly endless stone steps up to the high viewing platform, most veterans were determined to make the climb. Afterwards, there was a fitting visit to the LST & Landing Craft Association Memorial nearby where a wreath was laid. 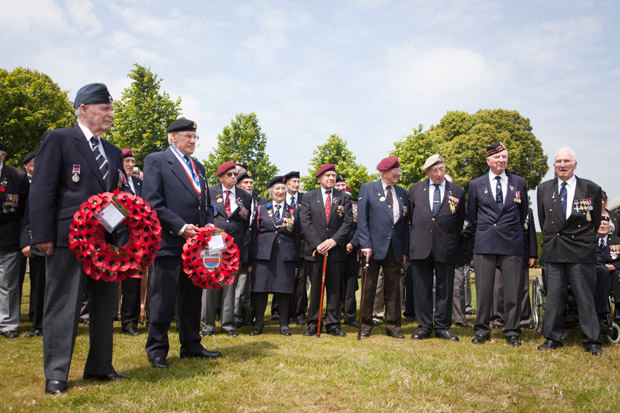 The Pegasus Bridge Museum is a favourite place, and typically a few veterans will take the opportunity to wander across the new bridge for a sneak visit to Caf Gondr where they always find a special welcome. With pipes & drum, there was a veterans march across the old bridge, leading to a moving exhortation and tribute. Many of our Paras were in attendance and were pleased to follow this with a visit to Ranville cemetery. 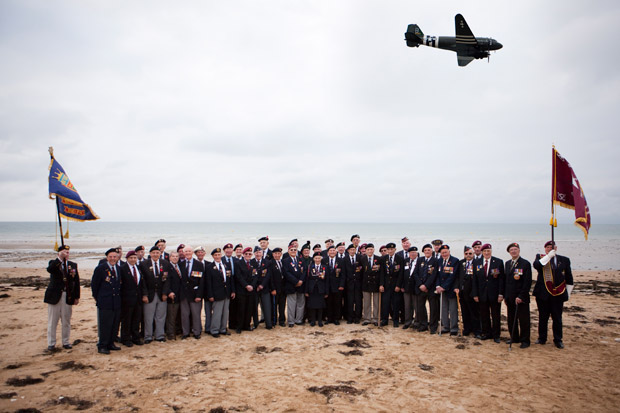 Although, as usual, these ceremonies have their important place during the visit to Normandy, we also make sure there is plenty of fun and relaxation time. The main day of course is 6th June, when there was a service at Bayeux Cathedral followed by the parade at the British Cemetery in Bayeux. These occasions provide plenty of opportunity to meet up with other veterans from all over the United Kingdom; those who have traveled individually with their families, and those in other organized parties. That afternoon, in common with many other visiting veterans, the D-Day Revisited party went to Arromanches for a few hours as happy tourists. Late in the afternoon it was jointly decided to do a beach tour in the two coaches, driving slowly along the coast road back to the hotel in good time for a leisurely evening meal together. At Sword Beach the two vehicles stopped so that all veterans could take part in a group photo on the sands. As this was gathered, a lone Spitfire with D-Day markings overflew the beach, followed by a similarly marked Dakota. After their fly-past at Arromanches, the Dakota flew low & slow over us, still gathered on the beach. All waved wildly and waved the standards; in response the Dakota flew lower in a 360 degree turn over us, with the pilot waving and waggling his wings. They were photographing us, as we were photographing them!

To so fittingly end that wonderful scene, the former Mayor of the town arrived, just out in the early evening walking his dog. In fast French, he spoke of his memory of the Landingswhen you all came that morningand was tearful as he recalled the scene as if it was yesterday. A child at the time, he spoke irreverently of les Boches running away and how he will never forget. He then proceeded to shake all by the hand and even boarded the two coaches to make sure he had not missed anyone. It was an unforgettable evening and left everyone in high spirits, and late for dinner. 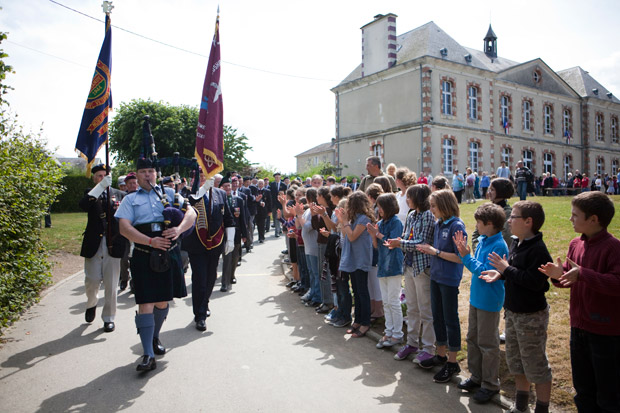 To end the visit, we journeyed off the beaten track a little and returned to the small inland town of Thury-Harcourt. Here the Mayor, M Paul Chandelier, had arranged an exceedingly warm and moving reception for the British Veterans who had fought to liberate their town 67 years earlier. Here the veterans visited a local primary school and heard the children sing the British National Anthem. The children were keen to practice their English and had lots of questions to ask!! Leaving there, the Mayor led our party back to the Town Hall where all were treated to a tribute formal lunch which had been beautifully laid out in the Ernie Blincow Memorial Hall which is dedicated to the 59th Staffordshire Division which liberated the town.

The party departed Thury Harcourt for the mid afternoon ferry out of Ouistreham. All happily relaxed during the crossing and spent the time chatting over experiences, whilst enjoying the bar, caf and restaurants on board. Many English and French tourists on board appeared to be very pleased to spend some time with our veterans and a few welcome rounds of drinks were offered around in continuing thanks for the part played in the Landings 67 years ago. Upon landing, all were quickly checked into the nearby Premier Inn for a good nights rest. After a huge breakfast the next morning, the coaches set off in good time for the road journey North, and home.