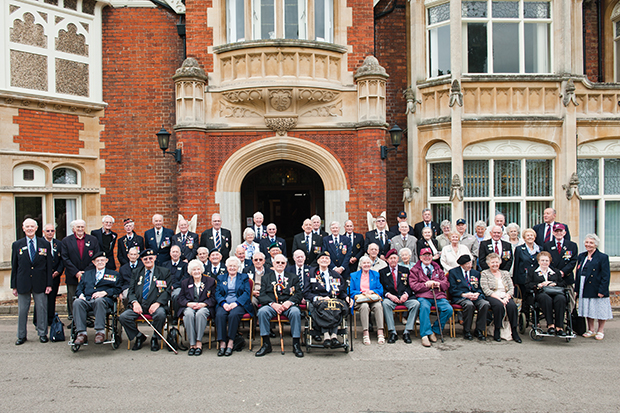 This year we started the event with a visit to the historic code-breaking centre at Bletchley Park. One coach departed from St Georges Hall in Liverpool, with a send-off from the new Lord Mayor, Councillor Sharon Sullivan. The second coach, with a gathering of veterans and companions from North Wales and the Wirral/Chester area, set off from Ellesmere Port. Once an en-route pick up was completed at Stoke, the party consisted of 41 veterans, 40 family members/companions, 5 medics, 1 piper and 6 helpers. Although there had been some late cancellations, on the positive side the final Group included two Normandy Veterans who had not been back since 1944. They are always such a treasure to everyone concerned. To be part of such a meaningful pilgrimage after a lifetimes interval is a huge privilege for the D-Day Revisited team.

Despite traffic delays caused by the Jubilee weekend, the two coaches arrived at Bletchley Park at around 1.30pm. There was a very warm welcome from management and staff at Bletchley, and a buffet lunch was presented to refresh everyone from their long journey. With red carpet treatment, veterans and guests were given special site guided tours which were conducted by Jean Valentine, herself a veteran Wren Officer from wartime days at Bletchley, and Tim Pulverman the Brigadier. The tours included visits to the Bombe Room, the D-Day and Pegasus Bridge displays and of course the Churchill Museum, a massive private collection which is a very special feature to browse around. Although such a visit could easily take a full day, our own time at Bletchley finished at around 5.15pm with a group photograph in front of the historic Manor House. 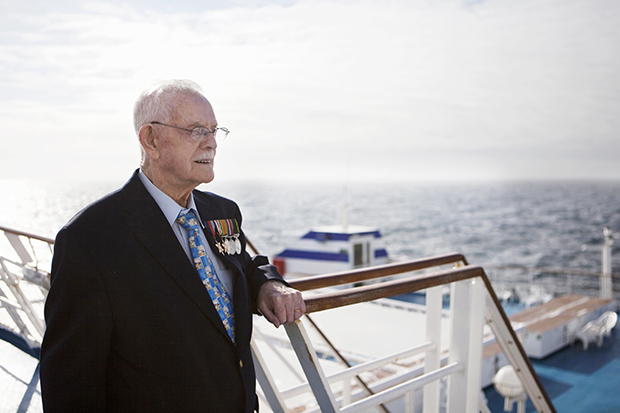 After an evening spent locally, the two coaches had a leisurely journey the following day to Portsmouth where we boarded at the Brittany Ferries terminal for the 2.45pm crossing to Ouistreham. Upon arrival at the Ferry Terminal, the 1940s style singing and entertainment group, Blitz & Peaces boarded the coaches. As usual, a wreath laying ceremony was arranged with the Ships Captain as the vessel approached the French coastline. The ceremony was very well attended and conducted mainly by the Royal Navy veterans within the Party.

After a good nights rest at the Caen hotel, a morning visit to Pegasus Bridge and Caf Gondr was followed by a midday stop at the Utah Beach Museum. The Curator welcomed everyone and there was then a fitting wreath laying ceremony and piped tribute at the memorial. After a tour of the museum, the two coaches made the brief journey to St. Mre Eglise in the American Sector where everyone enjoyed an afternoon of tourism. With the veterans in smart blazers and medals, townsfolk and tourists gave them all a very spirited and cheeful welcome graciously offering free teas and coffees in many of the cafs and bars!

On Tuesday, one of the Royal Ulster Rifles veterans, John Shanahan, asked for a visit to the military cemetery at Douvres la Dlivrande which contains many of the fallen of his regiment. As the coach approached, John was pleased to use the onboard PA to explain briefly the history of his regiments movements in the area and how there came to be so many casualties. There is always something very special and moving about hearing such explanations from the people who were actually involved, and not from a tour operator, however well informed.

The next stop was the ceremony at the statue of Field Marshall Viscount Montgomery at Colleville Montgomery. What a gathering this turned out to be! Normandy Veterans from Surrey and Norwich NVA branches were in attendance, along with pipers of the Piper Bill Millin Trust, and schoolchildren from both Colleville Montgomery and the inland town of Thury Harcourt. A fitting ceremony and wreath laying service was conducted, finishing with renditions of the Marseillaise and the British National Anthem. After this, the Town Mayor welcomed all in attendance to a Vin dHonneur which had been prepared in a marquee alongside the threshold of Sword Beach. 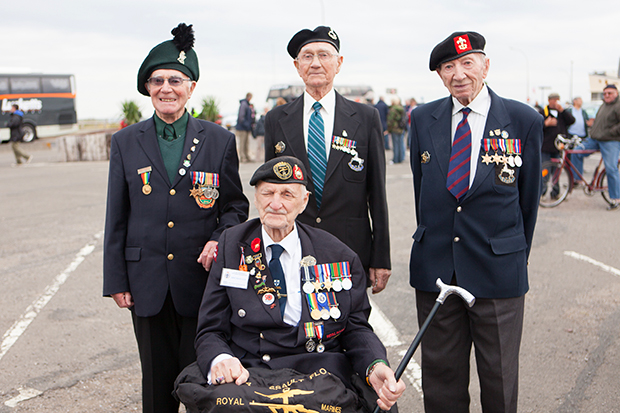 To suit the date of 5th June, a National Holiday across Great Britain for HM the Queens 60th Anniversary Jubilee, all veterans (including NVA Surrey & Norwich) met at the small town of Rots for a party in tribute to Her Majesty. First there was a ceremony at the town memorial, especially featuring one of the DDay Revisited veterans, Jim Baker DSM of the Canadian Regiment de la Chaudiere which was responsible for the towns liberation. After this, all gathered in the Grange au Dimes for a party lunch and a taste of local wine, cider and of course the Calvados. 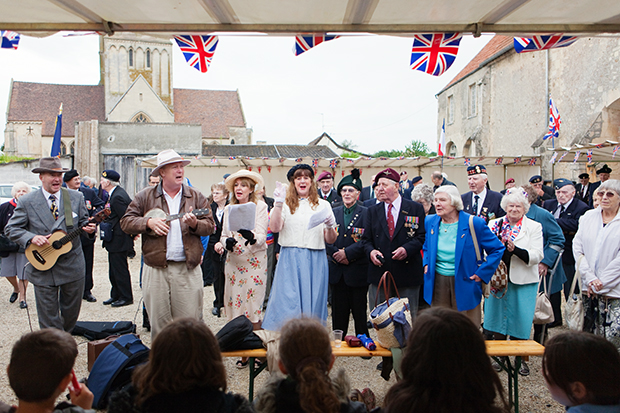 The Veterans were pleased to have the children of Thury Harcourt as their special guests. For the last three years DDay Revisited has happily joined the people of Thury Harcourt in various celebrations and commemorations in their town which was the scene of a devastating liberation during the Normandy Campaign. The Town Mayor, M Paul Chandelier, has always ensured a warm welcome on behalf of the town, so this Jubilee Party was a way in which the Veterans could offer a thank you in return hospitality. The singing group played a variety of 1940s jaunty songs for the children and excelled by singing Run Rabbit Run in French! Veterans were pleased to give all sorts of gifts, mementos of a very English nature, including Diamond Jubilee commemorative plates; one to each of the children and including teachers and civic representatives. Blitz & Peaces handed out sticks of Devon Rock and wartime blue-wrapper Kit Kats.

Generally, the Veterans believed they had properly represented Her Majesty in this spirited Jubilee Event in a small French town. Certainly, this is a piece of British eccentricity the children should not forget. The leader of 1940s singing group Blitz & Peaces, Arthur Cooke, presented the Mayor with a hamper of selected Devon produce and the children left through a tunnel of Normandy Veterans who clapped and cheered them back to their coach. 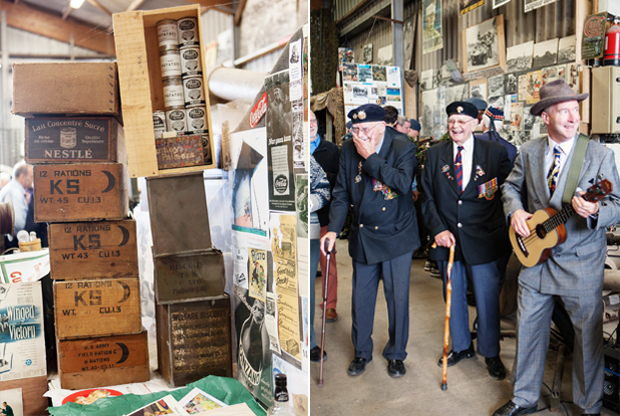 The main day of course is always 6th June, when there was a service at Bayeux Cathedral followed by the parade at the British Cemetery in Bayeux. Even though there is a formality to these occasions, the veterans took the opportunity to meet up with other veterans from all over the United Kingdom; those who have traveled individually with their families and those in other organised parties. Happily the rain mainly held off, despite a light shower, and the ceremonial tributes went well. In common with many other visiting veterans, the D-Day Revisited group went to Arromanches for the afternoon and enjoyed a relaxing time in the cafs and bars along the Sea Front. 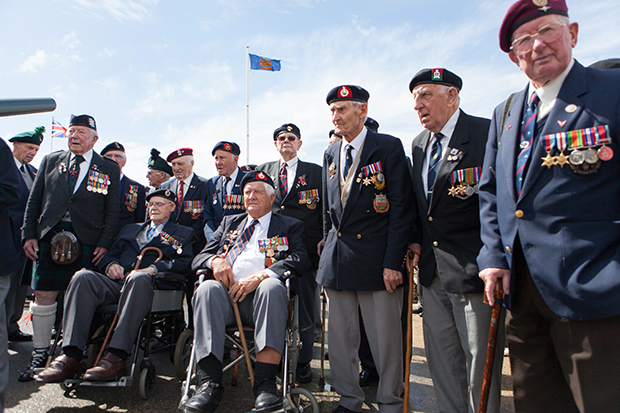 Veterans gather for a wreath laying ceremony in Arromanches

Late afternoon the coaches left for a beach tour on the way back to the hotel for an evening meal. A stop at Juno Beach gave Jim Baker the opportunity to visit the Canada House, the first property in mainland Europe liberated from a beach landing. Jim went on to take the salute of a platoon of Regt. de la Chaudiere and spent some time at the beachhead where he explained to those gathered around what had happened on the morning of 6th June 1944. It was a moving moment and one which led to lots of tears from many in attendance. Another stop gave Veteran, Bob Barker, the opportunity to see where he and his men landed on the western side of Sword Beach. By a fluke, the coach stopped at exactly the right place and Bob found the memorial to the Kings Regiment. It was a special moment for him; one which he said made the whole trip so very worthwhile.

The last evening at the hotel was a convivial time, with votes of thanks for those in the Party who had made the trip run so smoothly. The Medics were especially thanked for their efforts, although that was mainly for people in other groups who had come to France without medical attendance. Nevertheless, it is all the same cause and DDay Revisited gave them a special thanks for looking after everyone so well, and with such calmness and respect. After departure from the hotel, we visited the Royal Ulster Rifles memorial service at Longueval. There was a wreath laying ceremony in heavy pouring rain, followed by a visit to Ranville Cemetery to pay particular tribute to those of the Parachute Regiments who rest there. The weather improved in time for the short journey to Ouistreham, with a lunch stop en route.

After a crossing in reasonable weather, and a happy time on board, the vessel docked in Portsmouth just before 10pm and the Party stayed overnight in Port Solent. Following a good nights sleep and a very large breakfast, the road journey North took a few hours…home by 5pm.

A special thanks to our dedicated medical team and volunteers with again helping to make this pilgrimage comfortable and enjoyable for all involved. Thank you also to Kate Rossin of Depict Photography for capturing the veterans’ visit to Bletchley Park. All other photographs courtesy of Victoria Phipps.