According to the original plan the 70th Anniversary Voyage was over, complete. The Millin-Montgomery Pipes had been played in and out of twenty one ports and harbours for a thousand miles across the United Kingdom. From Portsmouth we had faithfully followed the crossing as has been undertaken exactly seventy years before. Including John Millin representing his father, Piper Bill Millin, 57 Normandy Veterans from Scotland, Northern Ireland, England & Wales had crossed with the Pipes and, in the company of their Sovereign, had paid their respects to fallen comrades.

Included in this group of remarkable veterans there were men representing all sections of the British Armed Forces. Alongside the men were two ladies, also veterans: Vera Hay of the Queen Alexandra Imperial Military Nursing Service and Marsie Taylor who served as a Wren on Eisenhowers staff in Southwick House.

Then of course there were the two Americans, both experiencing their first return to Normandy since 1944. Basil Woolf was born British and served in the Royal Navy. Having settled in America in the 1950s, Basil made the journey from Florida to attend this historic anniversary. He was accompanied and supported by his son, Ian. A native American, Irving Locker arrived into England early so that he could re-visit Devon where he had prepared for D-Day. Accompanied by his wife, Bernice, Irving had attended the Millin-Montgomery Voyage’ tribute to Operation Tiger in Lyme Bay (see Chapter 9). 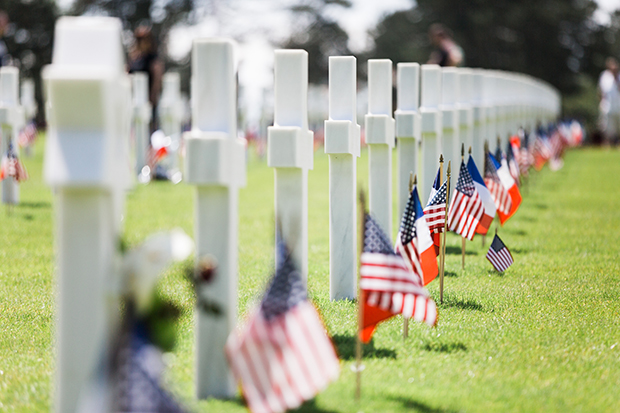 It was with the Americans in mind that we accepted there was unfinished business requiring attention. Accordingly, on Saturday 7th June the D-Day Revisited Group of Veterans visited the American Sector. The day began with a ceremonial visit to the United States Colleville Cemetery which so dramatically overlooks Omaha Beach. Welcomed by the Reception Staff, all the veterans made their way to the central memorial where the previous day had witnessed the main anniversary ceremony which had been led by the American President, Barack Obama. 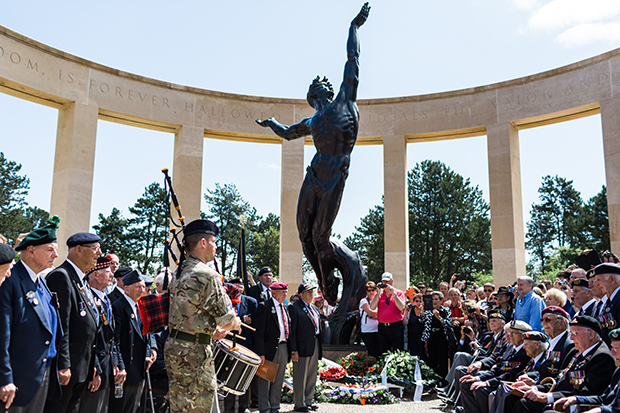 Naturally, US Utah Beach D-Day Veteran Irving Locker was asked to take the central role in laying the wreath. Black Watch Piper Jamie (Ted) McDonald played the Millin-Montgomery Pipes as his Black Watch comrade, Will Crawford, directed the procedure and played the drum. Will called the veterans to attention and officially directed the ceremony as visitors watched respectfully. The Exhortation was spoken by British veteran John Grange, who had served aboard a Liberty Ship bringing US troops from Falmouth to Omaha Beach.

They shall grow not old as we who are left grow old. Age shall not weary them nor the years condemn. At the going down of the sun, and in the morning, we will remember them.

After the wreath laying ceremony, a small group of veterans made their way over to one grave which had so properly been selected to bring the Voyage to its final conclusion. Even entering the burial area from the memorial, the broad vista is deeply moving. For those who enter from the museum along coastal path, there is a particularly moving impact as more than 9,000 headstones come into view. 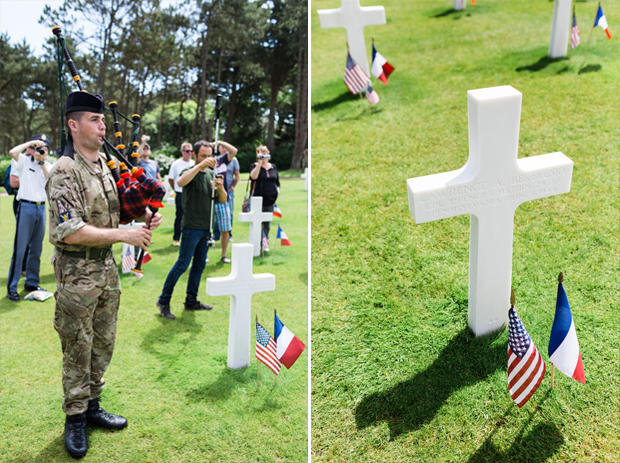 Cemetery Management had advised the location of the last resting place of Corporal Lawrence A. Bekelesky of B Company 121st Engineer Combat Division. It was when the Voyage had visited Padstow in Cornwall on the weekend of 17th/18th May that we first became aware of Lawrence Bekelesky (see Chapter 7), taking the opportunity to single out this young American GI as a symbolic example of all those men who crossed the Atlantic Ocean to join the fight for liberation. From Padstow the Voyage again touched the journey of these men of the Engineer Combat Division when performing the seaborne ceremony off Slapton Sands. With that event in mind the two veterans who attended, Don Reynolds and Irving Locker, were invited to lead this final intimate tribute. 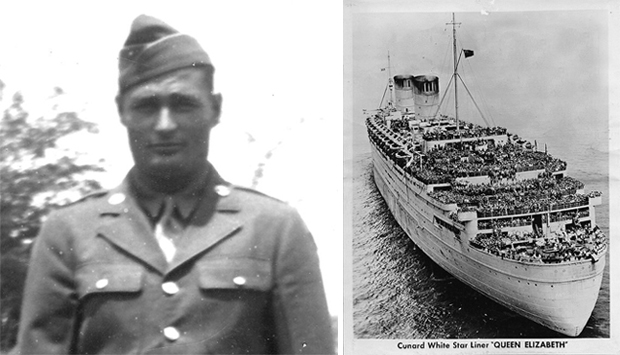 Both Don and Irving, along with those in the D-Day Revisited team, felt they had made close acquaintance with this 24-year-old soldier from Summit County, Ohio. We had followed Bekelesky’s whole journey from arrival into Gourock in Scotland to the West Country for training, to Slapton Sands, to Weymouth, and finally now to Omaha Beach on the Normandy Coast. Once again, both veterans recognised quite simply that they had been blessed with seventy years of life after D-Day which Lawrence Bekelesky and many of his comrades had been denied.

On Omaha Beach, men of the 121st Engineer Combat Battalion had breached the Atlantic Wall defences to create an exit from the bullet swept beach.

On this day of 7th June 2014, seventy years and one day after the scene of carnage at this exact place, a number of visitors gathered to witness this graveside ceremony. This was a group of friends paying respects to one man; one highly trained GI who lost his life a long way from Prideaux Place in Padstow and even further from his hometown in Ohio. None of us knew him, yet by a coincidence of discovery during the Anniversary Voyage of 1,000 miles, this soldier came to represent all the American GIs who fought and fell in the battle for freedom. 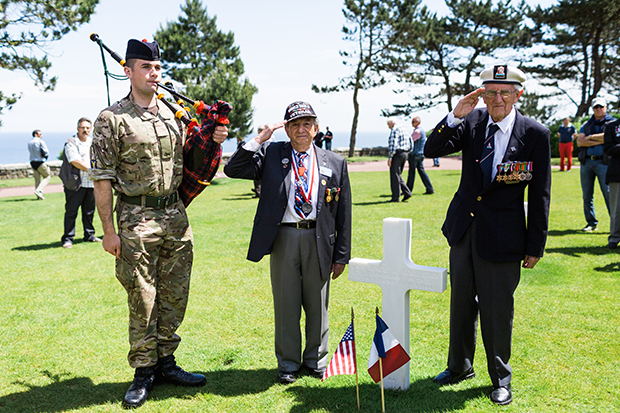 The Piper played… Irving and Don laid the wreath; they stepped back and gave a stiff salute. Matching the youth of Corporal Lawrence Bekelesky and his Combat Engineers, these two young men of the Black Watch Regiment came to attention and gave their salute. The tribute over, an explanation was given to those who had walked over to join the group. The headstone and resting place were then left in peace once more, in the front row of the cemetery with an eternal grand view of Omaha Beach as the small waves softly tumbled at the waters edge. 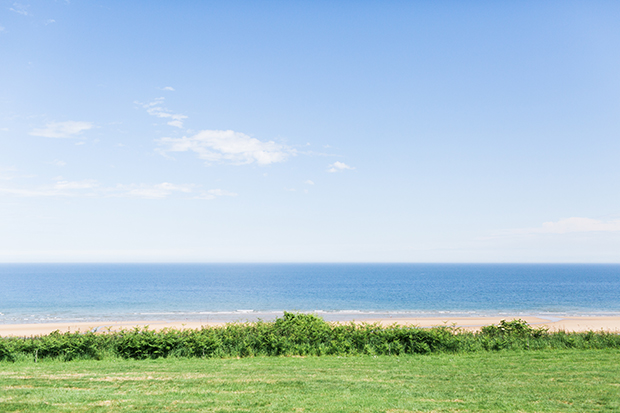