On Monday 5th May, a Bank Holiday, the Group gathered at the Town Crannog Pier. At 0945 as members of the Fort William Branch of Royal British Legion (Scotland) formed up in two lines, John Millin played the Millin-Montgomery Pipes from the Jetty across Souters Lass and onto the Coastguard Cutter, MCA Hunter. It was here that he ceremonially handed the Pipes over to the Remembrance Voyage Piper, Karl Wainwright. 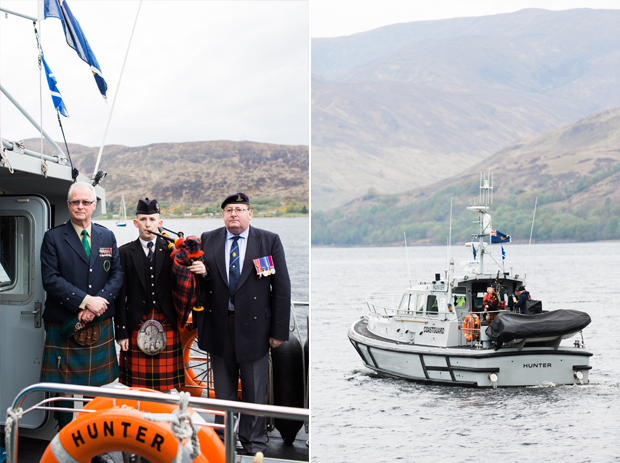 Special thanks go to the crew of MCA Hunter and in particular the Skipper, Kenny Devine. All local arrangements had been made with the willing assistance of Kevin Lane MBE, Vice Chairman of the Fort William Branch of the Royal British Legion (Scotland). Once the Pipes were safely in Karls hands, the rest of the Party gathered aboard Souters Lass ready for departure the commencement of this Voyage across all four parts of the United Kingdom. In exactly four weeks to the day, on arrival into the Portsmouth Historic Naval Base the Pipes would be returned from Karl back to John Millin.

As the MCA Hunter slipped away from the Jetty it was closely followed by the Souters Lass with all the Send-Off Party aboard. A flotilla of sailing yachts joined from the Fort William Sailing Club and Bethany Mundey of the SeaXplorer out of Ballachulish. As the sky cleared, the scene quickly developed into something quite extraordinary. Karl stood on the deck of MCA Hunter as it motored along on the shore side of the other vessels. Fittingly chosen by Karl, the sound of Heilan Laddie could be heard dancing on the water of Loch Linnhe for all to hear. 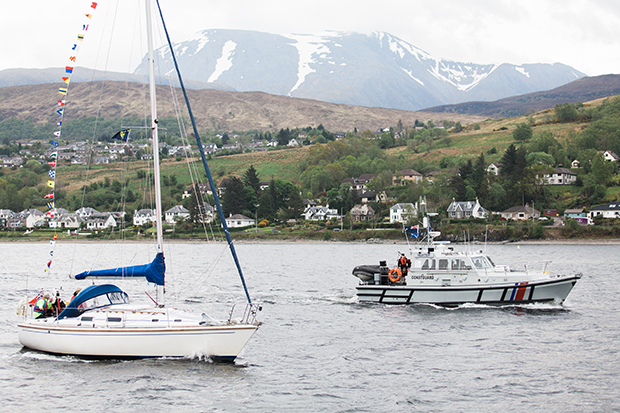 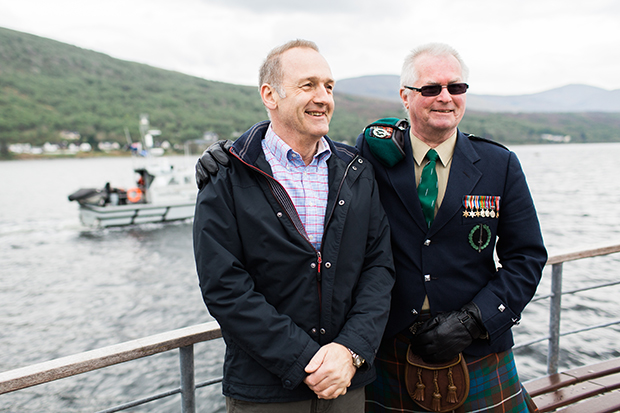 I was privileged to be standing with John Millin at the guard rail of Souters Lass shortly after leaving the Jetty. Just alongside was the Coastguard Cutter, MCA Hunter, moving slowly along the Loch; there was Karl standing proudly in full view, playing his heart out. Behind the coastguard vessel was the town of Fort William and above that the snow covered grandeur of Ben Nevis. What a captivating and memorable scene! Inevitably I had to ask John Millin what his father would have thought of this: a spectacle of Piping tribute to Fort William and the Highlands seventy years on. John was so obviously moved by the scene and spoke quietly about how his father would have been delighted, knowing also this is just the start of a long journey linking the Nation in honouring all those who contributed to the success of the Invasion and Liberation. We both stared, took in the remarkable view and the sound of the Pipes.

There were people along the shoreline waving as the flotilla made its way along the Loch. Once the group of vessels had established itself in order, Kevin Lane made his way to the Bridge and made a deeply appropriate speech using the public address system. 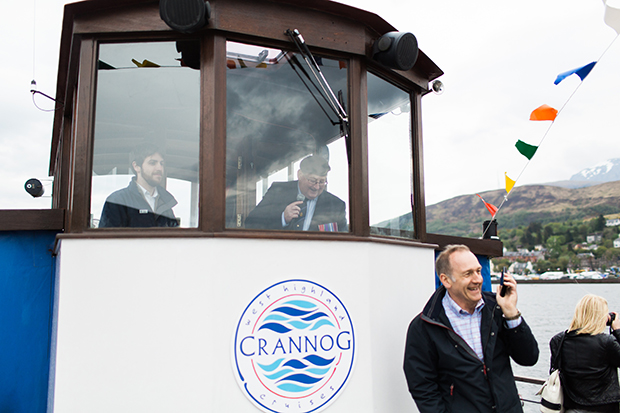 On behalf of the Owners of Souters Lass, D-Day Revisited and the Fort William Branch of the Royal British Legion Scotland may I welcome you on board Souters Lass today as she participates in the Millin-Montgomery D-Day 70th Anniversary Voyage of Remembrance. In May 1940 the British Expeditionary Force that had been fighting against the might of the Germany Army found itself pushed back to the Channel port of Dunkirk and was facing certain annihilation. A hasty plan, code named Operation Dynamo was put together and as a result a flotilla of the legendary Little Ships and Navy vessels sailed to Dunkirk and managed to pluck a total of 338,226 men from the beaches.

Four years later, starting on the 6th June 1944, or D-Day as it is more commonly known, a flotilla of over 4,000 vessels and a million men crossed the channel to the beaches of Normandy as part of Operation Overlord. This was the biggest assault that has ever been launched on a hostile coast and was the springboard that led to the final liberation of Europe. Today, as we approach the 70th Anniversary of D-Day, we are raising awareness of both these events by firstly having our own flotilla of Little Ships that you see around us; and by paying tribute to Piper Bill Millin whose deeds on D-Day, and at other points during the War, were an inspiration to so many.

Piper Bill Millin was trained as a Commando here in the Highlands at Achnacarry and subsequently became the personal Piper to Brigadier Lord Lovat. On D-Day he landed on Sword Beach as part of the first wave of Commandos and under heavy fire he marched along the waters edge playing his Pipes in order to lift the spirits of those coming ashore. Bill survived the War but passed away in 2010. To ensure that his memory and that of all those who took part in D-Day is remembered, a replica set of Pipes was commissioned and just prior to us sailing these were handed over by Bills son, John Millin, to a young Piper who will now take them in a relay of Little Ships from here in the Highlands around the coast of the UK and Ports in Northern Ireland until they finally arrive at Portsmouth. 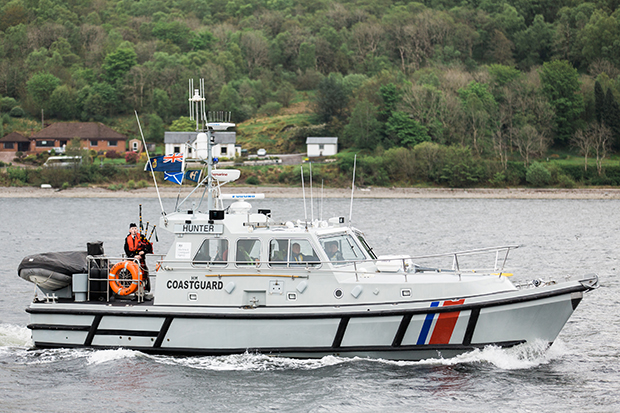 Once they are in Portsmouth they will be handed back to John in preparation for him taking them across the Channel in order to present them to the Mayor of Colville-Montgomery during a civic reception on the 6th June. Ladies and Gentlemen, the events of D-Day in 1944 are an incredible feat in their own right but the actions of individuals such as Bill Millin are an inspiration to us all and we are privileged to have his son John on board Souters Lass with us today. Finally, I am certain that I speak for us all in wishing the Pipes, God Speed, Fair Winds and Calm Seas on their journey.

The Souters Lass continued on its course as far as the Glencoe Inlet at Ballachulish where all in the Party waved farewell to Karl and the crew of MCA Hunter. By this stage seals were in clear view on rocky outcrops near the edge of the Loch, with Karl playing finally as the MCA Hunter put on speed towards Oban. 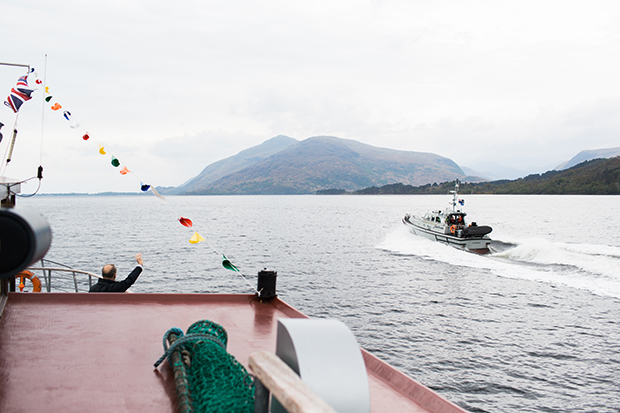 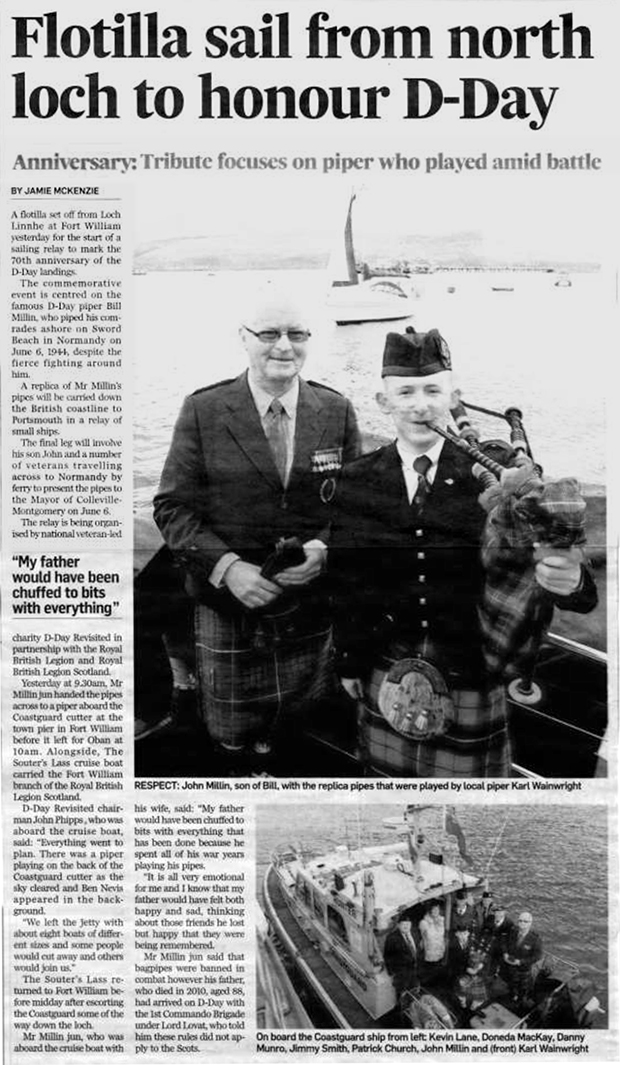 To read the next chapter in the tale of the Millin-Montgomery Voyage click here:
CHAPTER 4. Voyage in Scotland