The Coastguard Cutter MCA Hunter arrived into Oban to be greeted by quite a large group of people gathered around the old harbour. Our Voyage Piper, played the Millin-Montgomery Pipes as the vessel entered the harbour and tied up at the quayside.

Despite best efforts, unfortunately the Royal British Legion (Scotland) Oban Branch didnt show any interest in this Remembrance Voyage so we didnt have a Little Ship booked for the next leg of the journey. Although this was a shame to fail at such an early stage, the Voyage was inevitably dependent upon local interest and support. The Voyage Manager, Eamonn Cowan, toured the harbour and marina but was unable to find a suitable boat. In the circumstances we cheated and drove the short distance to Crinan.

It was there that Eamonn came upon the private yacht Hydaway whose Skipper, Gary Wilkinson, and Mate, Graham Cutts, were keen to arrange a fitting harbour arrival.

The next morning Eamonn and Karl drove along the canal for about six miles to Ardrishaig where they were scheduled to meet the next vessel. By prior arrangement with the Royal Navy we were fortunate to have the support of one of the P2000 Coastal Patrol Boats from the Faslane Squadron. So, on the morning of Wednesday 7th May, HMS Tracker tied up alongside for Eamonn and Karl to board. 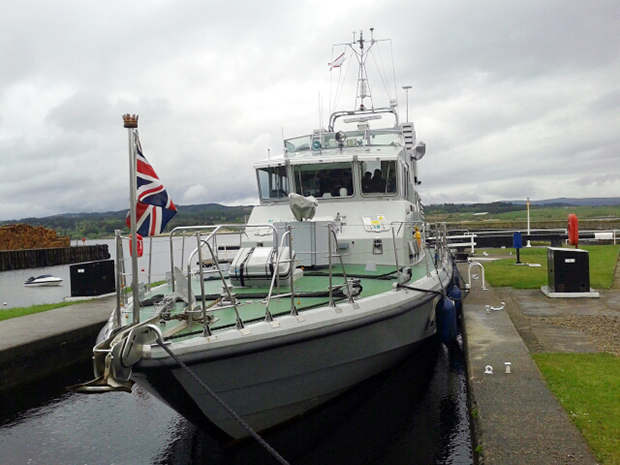 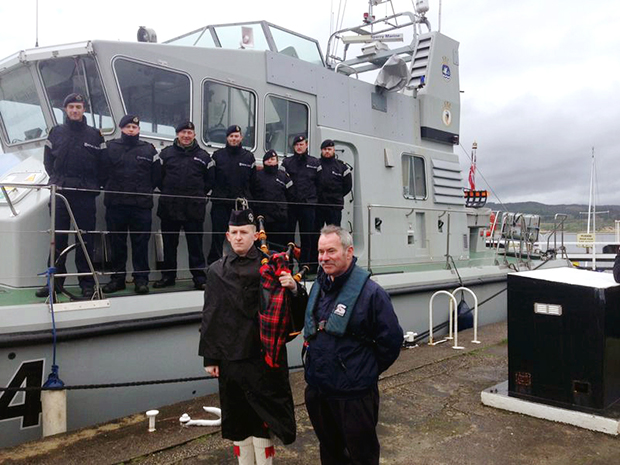 With all kit loaded for the overnight stay aboard, we arranged for the road vehicle to be taken separately to Cairnryan so both Eamonn & Karl could travel together on this sea journey through the islands. The Commanding Officer, Lieutenant Ed Munns, welcomed the two and they slipped away from the quayside at around midday, setting course for Campbeltown. We had arranged for a stop to conduct a wreath laying ceremony at sea: this was done in the Sound of Bute about halfway along the journey, in close proximity of Kintyre, Arran and Bute.

As the vessel was brought to a halt, the Commanding Officer Lieutenant Ed Munns called the Ships Crew to muster on deck and made the following short dedication speech:

Representing the wider Highlands and Islands Region, this point is selected to remember those who trained here seventy years ago. Lives were lost in practice beach landings and in training on the Isles of Arran, Bute and Inchmarnock, although fortunately few. These tough exercises prepared the men for the forthcoming D-Day beach Invasion which led to the freedom of Europe.

They shall grow not old as we that are left grow old. Age shall not weary them nor the years condemn. At the going down of the sun and in the morning, we will remember them.

A prepared wreath was then cast onto the water.

HMS Tracker reached Campbeltown early that evening, with Karl piping the Patrol Boat into Harbour. The local people were pleased to welcome the party ashore and plenty of photographs were taken by the Local Press interested to capture the Voyage story.

Thursday morning saw the departure from Campbeltown, again with Karl piping out of harbour. After an uneventful sea crossing, HMS Tracker arrived into Stranraer at noon. As usual, Karl piped the vessel into Harbour; this time being greeted by Normandy Veteran, John Shanahan. John served with the Royal Ulster Rifles and had landed on Sword Beach in the second wave on D-Day. John and his partner, Beryl, were respectfully greeted by Lt. Munns and invited on board to be shown around and to meet the crew. 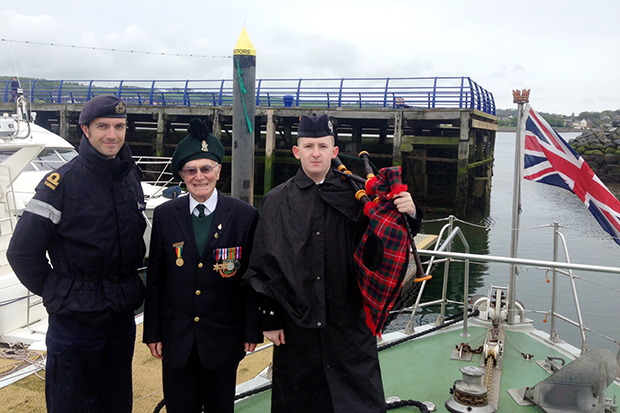 With all ashore, Karl disembarked and played the Millin-Montgomery Pipes as HMS Tracker left the Harbour for Faslane tasking.

To read the next chapter in the tale of the Millin-Montgomery Voyage click here:
CHAPTER 5. Scotland to Ireland to England