“On arrival in Stranraer, Lt.Munns and Crew on HMS Tracker gave us a very warm welcome and said they had been so delighted to be part of the Millin Pipes journey not least as they rarely have the opportunity of patrolling out of their area. We were invited on board and treated with great respect.

The following morning we had an early start from Stranraer to catch the Stena Ferry; Karl played the Millin-Montgomery Pipes as the Ferry left harbour. A short Remembrance Service took place, the ferry staff announced this on the outside deck and a good number attended, despite the wind & rain.

Arriving into Belfast Port we were met by Alan Hamilton, Chairman of the Royal British Legion. In conjunction with RBL Liverpool and D-Day Revisited it was Alan who had organised the days events and ceremonies. Once off the Ferry we were taken to the mooring where the boat Ilmatar II was waiting for us. 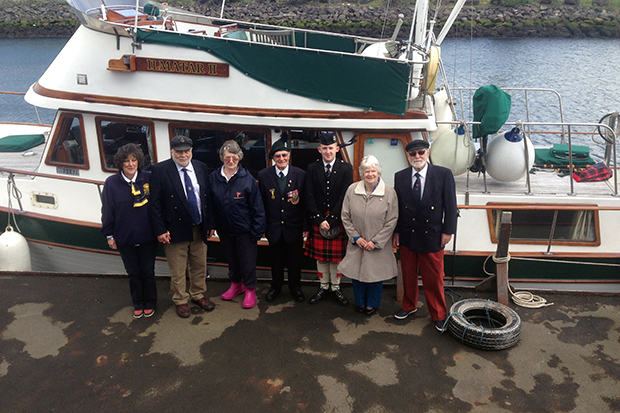 Howard and Marie Duggan had offered their Trader 39 Trawler Yacht to take us across to the harbour of Carrickfergus. Karl played the Pipes as with John beside him we set out across the estuary, together with two other members of crew, Wendy and Norman Grant. Despite the ride being bumpy we really enjoyed sailing and being shown all the local landmarks. As we neared Carrickfergus harbour, an RNLI dinghy including another yacht and smaller vessels escorted us in. It was an amazing welcome and one we shall not forget.

The Millin Pipes were played as we entered the harbour and anchored alongside the pontoon. Many people were lining the sea wall along with serving 0fficers of the Royal Navy, Royal Air Force and Royal Marines. We were also impressed to see a large party of Sea Cadets headed by their Commander who saluted John. With the Millin pipes playing, we made our way up the walkway to be greeted by the Lord Lieutenant, Mrs Joan Christie, the Mayor and Councillors all in their red robes. 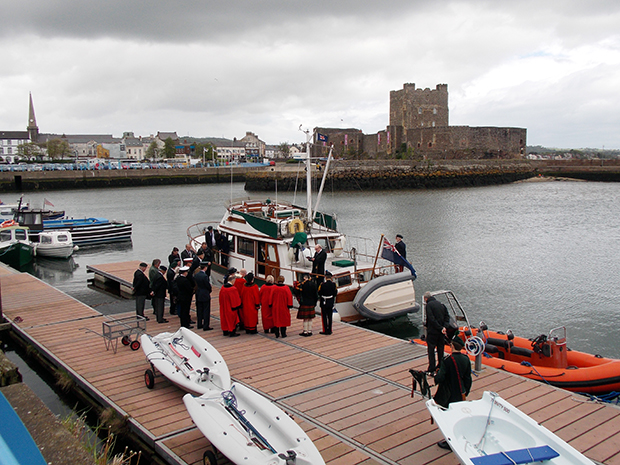 We then returned to Ilmatar II with the Lord Lieutenant, Chaplain Sam Grant, the Officers and as many as could crowd on the boat and sailed out for a short Service of Remembrance and wreath laying. The Chaplain was unable to take the full Service on Ilmatar as the sea was choppy, so when returned everyone lined up on the pontoon and sea wall to listen as the Chaplain completed the Service and told the Piper Bill Millin story.

The Millin-Montgomery Pipes and our Party were given a Civic Reception and the whole Bill Millin story was told repeatedly. In general everyone said how wonderful the day had been and so pleased that D-Day Revisited had chosen Carrickfergus as one of the ports on the 1,000 miles voyage of the Pipes as the local people longed for the opportunity of some normal celebration in their lives. 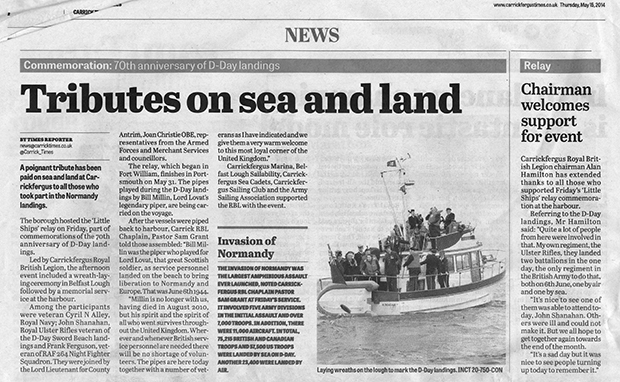 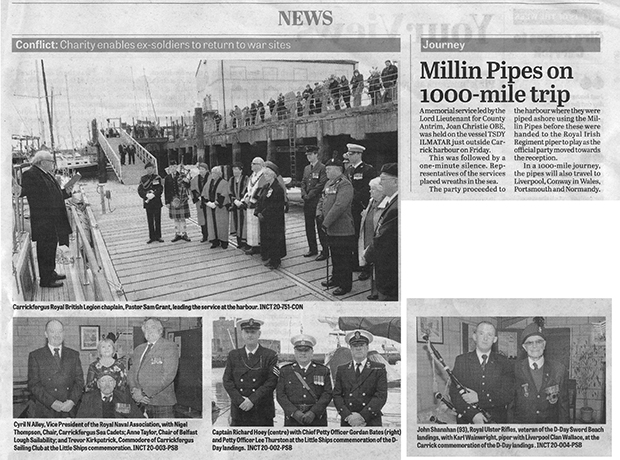 Saturday morning the party joined Stena Line for the crossing to Liverpool. Once at sea, Stena Line announced that at 11.00am a short Remembrance Service would take place on deck and a good number of passengers took part. John gave the Veterans Exhortation whilst Eamonn cast a wreath onto the sea as Karl played a lament on the Millin Pipes. We were pleased to note that Stena Line gave the party free passage together with a lovely lunch. All the staff and passengers showed great interest. The Ferry docked at Birkenhead Twelve Quays at around 6pm.

Sunday morning dawned and we went up to Liverpool Pier Head to watch as the Millin Pipes came across on the famous Mersey Ferry. Two Royal Navy Normandy Veterans were on board John Dennett and Richard Llewellyn, accompanied by Eamon and Karl the Piper. 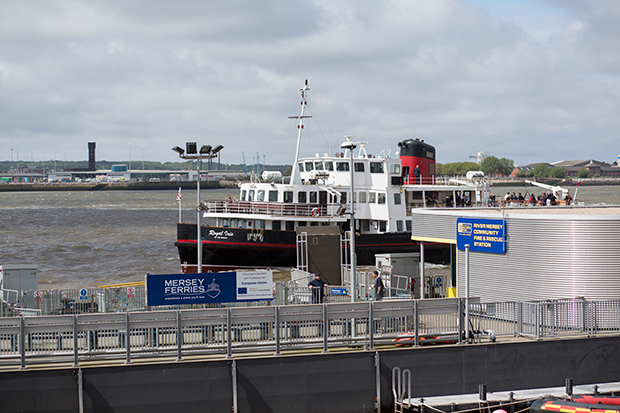 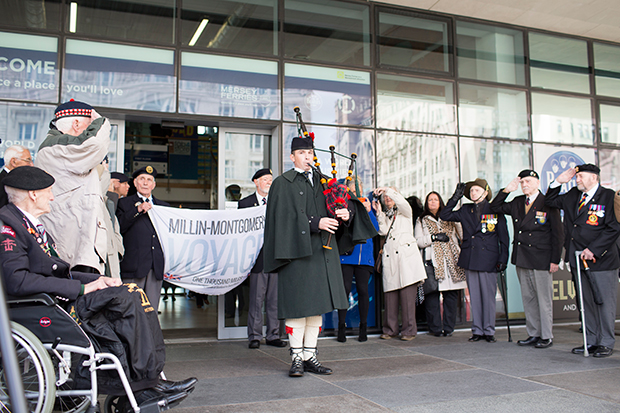 Karl played the Pipes as the Ferry approached Pier Head; this was also enjoyed by all on board. The Millin-Montgomery Pipes were played up the gangplank by a Piper from the Clan Wallace Pipe Band and given a warm welcome outside the terminal entrance with a WWII Veterans Guard of Honour, the Clan Wallace Pipe Band, Sea Cadets, relatives and a crowd of interested members of the Public. This was filmed by the BBC for broadcast on the Local News. 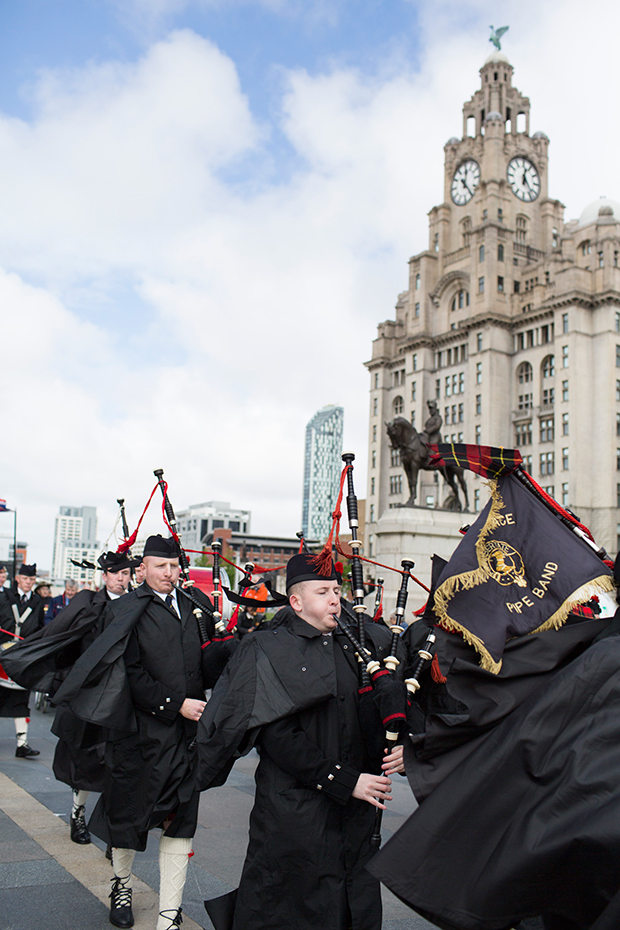 After a Massed Pipe Band session outside the Ferry Terminal, there was a piped march over to the New Liverpool Museum where all the attending veterans were greeted by the Lord Mayor of Liverpool, Councillor Gary Millar. 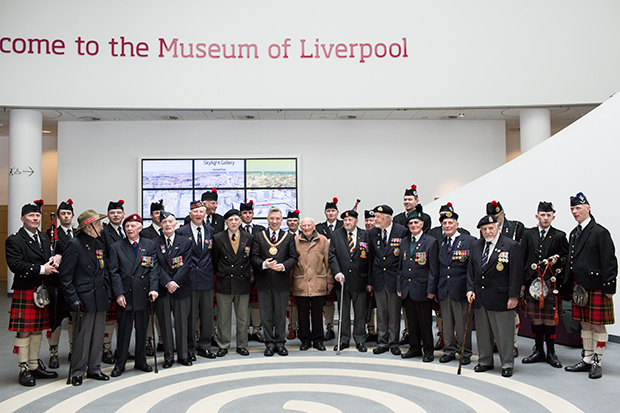 The Royal British Legion Liverpool City Centre Branch had arranged the Piped Band reception as well as the following refreshments offered by the Museum. This was very welcome and much enjoyed by all the Veterans. Afterwards we were able to explore the Museum, including the King’s Regiment exhibition.

This wonderful riverside event completed a very interesting, privileged and unique experience for us both.”

We are very grateful to Beryl for this personal report and of course especially grateful for the effort made to attend this section of the Millin-Montgomery 70th Anniversary Voyage. John Shanahan is a Veteran of the Royal Ulster Rifles who landed on Sword Beach early on D-Day so it was especially fitting for him to take part in this ceremonial visit to Ulster.

Whilst waiting for the Mersey Ferry to arrive at Woodside, the group gathered in the caf. It was here that John Dennett pointed out the dry dock alongside the Terminal building. It was here, John explained, where LST-322 was brought to prepare for D-Day. John had left Scotland in December 1942 to become part of the crew of this LST (Landing Ship Tanks) as it was released from the Shipbuilders in Philadelphia. After crossing the Atlantic followed by action in North Africa, Malta, Sicily, Salerno and Anzio, this was the first opportunity to have the hull bottom scraped and repaired before Normandy. It was such a fitting coincidence for John that the Millin-Montgomery Voyage should pass through this exact spot which allowed him a welcome Leave seventy years previously!

After the grand reception and ceremonies in Liverpool there was an unfortunate loss of the next Little Ship which had been promised by a private owner. However, this coincided with a blast of bad weather which unfortunately made sea conditions to be too rough for a departure.

To read the next chapter in the tale of the Millin-Montgomery Voyage click here:
CHAPTER 6. England to Wales to England