ENGLAND TO WALES TO ENGLAND

The original plan was to stay in Liverpool over the weekend, then depart for Conway on Monday morning 12th May. Unfortunately we hit a period of very blustery weather so it wasnt possible to depart as scheduled. Disappointing at the time of course, yet little did we know how this delay was to help us so brilliantly further along the voyage.

The Royal British Legion Liverpool City Centre Branch had moved quickly to find a replacement Little Ship. This came courtesy of Hazel Phillips and Dan McCarthy of Turbine Transfers Ltd, a Company which operates a modern catamaran used to service the wind turbines in Liverpool Bay. Dan is the Operations Manager and came forward enthusiastically to help, offering the use of their vessel, Wylfa Head. Of course the bad weather delayed departure until Tuesday 13th May but all was set.

We contacted Royal Navy Veteran, John Dennett, and asked if he would like to accompany Karl on this leg of the Voyage crossing from Liverpool Marina to Conway Marina. John was keen so he boarded with Karl at 0830 and was joined by video journalist Kate Rousseau.

Karl played the Catamaran out of Liverpool after which the crossing was quite smooth. RN Veteran, John, enjoyed sitting alongside Skipper, Dave Dykes, and sharing nautical experiences no doubt! 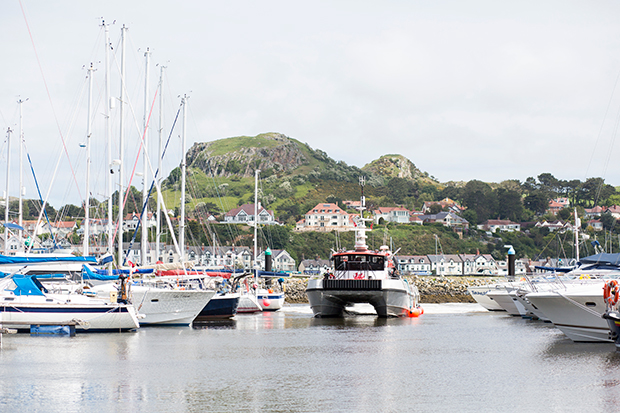 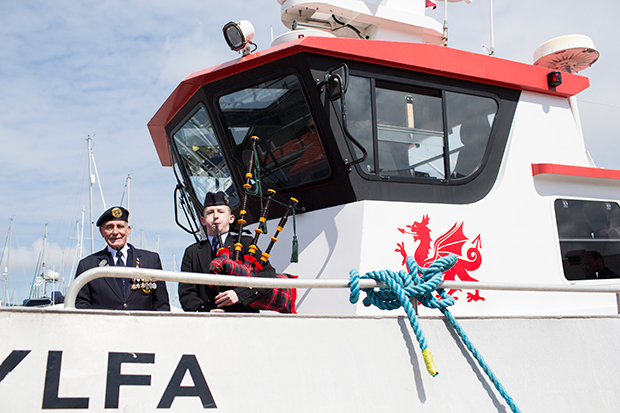 The vessel was met at Conway Marina by a group of North Wales Normandy Veterans including Brian McManus and Vernon Parry. Royal Ulsters Veteran, John Shanahan, was also there to celebrate the arrival as Karl piped the Catamaran to the Jetty. Nearby of course is the Mulberry Public House, a lasting acknowledgment that Conway was closely involved with the beginnings of the Mulberry Harbour concept before it was moved up to Dumfries for assembly and trials. 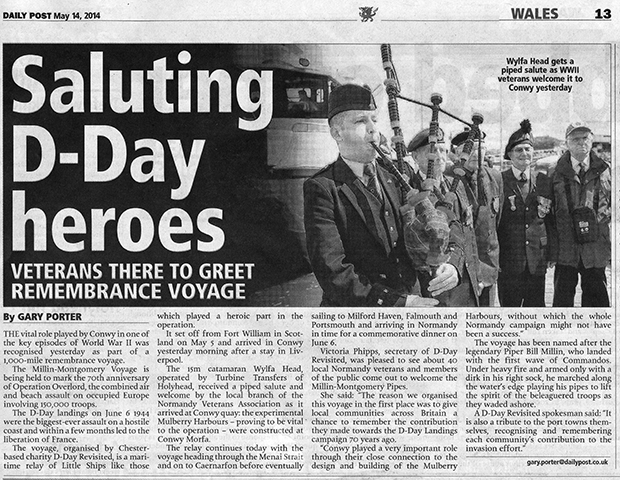 The following morning, Wednesday 14th May, Karl and Eamonn were out early and met with Gary Johnston who was in charge of the Coastguard RHIB. Departing to suit the tide, Karl played the boat out of harbour for the short run to Caernarfon. Eamonn thanked Gary on behalf of D-Day Revisited. 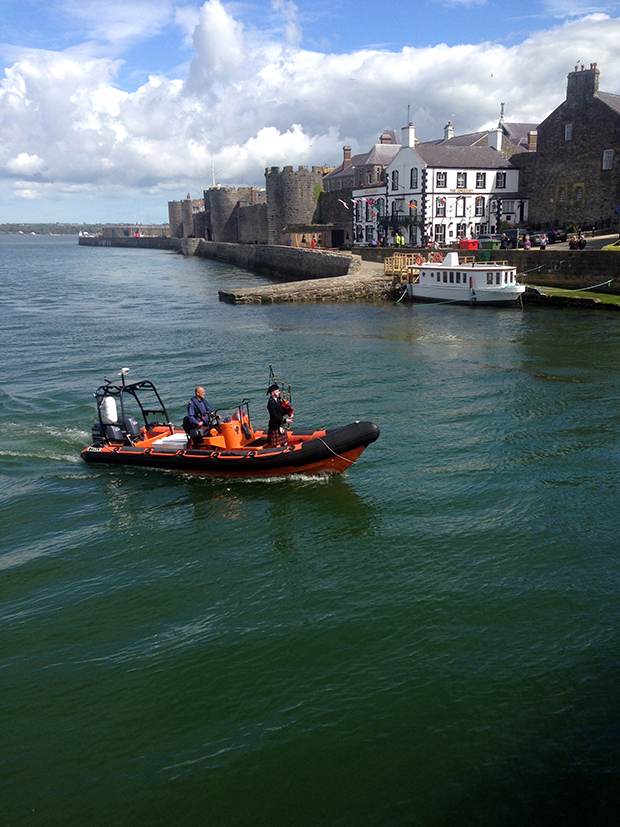 Unfortunately the voyage link broke down here due to a Little Ship being withdrawn at short notice. The next leg was the first of two cheats; Eamonn and Karl travelled by road to Pembrokeshire in South Wales where they were greeted at the Angle RNLI Station by Lewis Creese.

During the Second World War there had been an RAF Base at Angle but this has long been returned to farming to the extent it can now hardly be identified. However this southern part of Pembrokeshire was the home to many airfields, mainly used for protection of Western Approaches and submarine hunting. Huge bases were established at Dale and Talbenny, both within view of Milford Haven. The largest flying boat establishment in Europe was at Pembroke, with associated base at Lawrenny.

Reporting at the RNLI Station at 0900 on Thursday morning 15th May, Karl went aboard for the run along the estuary into Pembroke Dock. He played the lifeboat out of Angle as they headed upriver. The visit to Pembroke had been the subject of much planning over a period of months consulting with the Pembroke Harbour Office where the main contact was Anna Molloy, and with John Evans at the locally based Sutherland Trust. 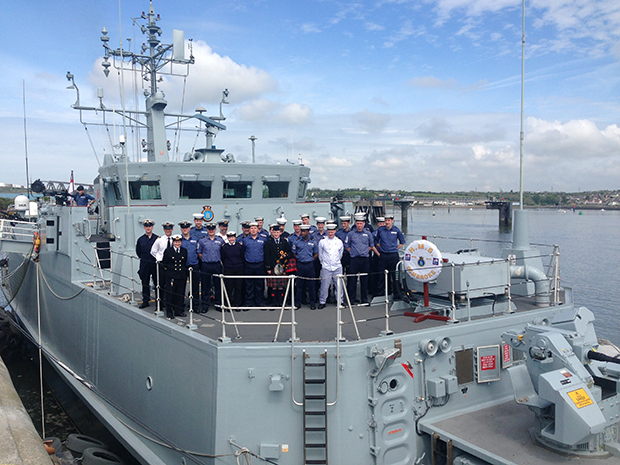 The RNLI boat secured an arrival point near to Minehunter HMS Pembroke which was on no. 1 berth for the bi-centenary celebrations of the towns service as a Naval Base. As Karl piped ashore this coincided with a school visit to HMS Pembroke so he was invited on board to join the reception and ceremony. Later in the day the Sutherland Trust arranged a ceremony to take place at the Garrison Chapel; this was attended by John Evans and members of the Trust along with a number of local military veterans. 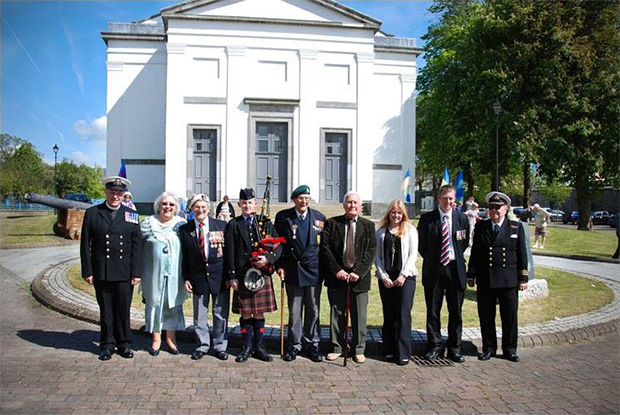 D-Day Revisited was especially pleased to meet RN Normandy Veteran, Ted Palmer, and his wife Phyllis. Ted served aboard the famous battleship, HMS Rodney, during Operation Neptune the Normandy Invasion, and later on the Arctic Convoys. Ted now lives in Swansea and was pleased to make the short road journey to attend this ceremony.

Special thanks go to the Pembroke Harbour Authority for their arrangement of the Little Ship to be used for the next stage across the sea to Padstow in Cornwall. This was the diver vessel named Predator being made ready for departure the next day.

Eamonn & Karl were delighted to play even a small part in the towns bi-centenary celebration.

To read the next chapter in the tale of the Millin-Montgomery Voyage click here:
CHAPTER 7. Return to England, Padstow and the U.S. 121st Combat Engineer battalion