The diving boat, Predator, was played out of Pembroke Dock on the morning of Friday 16th May, aiming to make the crossing in time to arrive at Padstow to suit the rising tide for access into the inner harbour at around 1900hrs. Meanwhile Eamonn took to the roads across South Wales to the Severn Crossing, M5 to A30 to Padstow… quite a drive and much easier by sea!

Later that afternoon, or rather early evening, the Predator arrived a little ahead of schedule and waited for half an hour or so outside the Tidal Gate. This was opened at about 6.30pm and Karl piped the boat into the Padstow Inner Harbour to the delight of tourists and the yachties who had gathered to see what all the racket was about. The Predator tied up alongside the TS Jack Petchey. 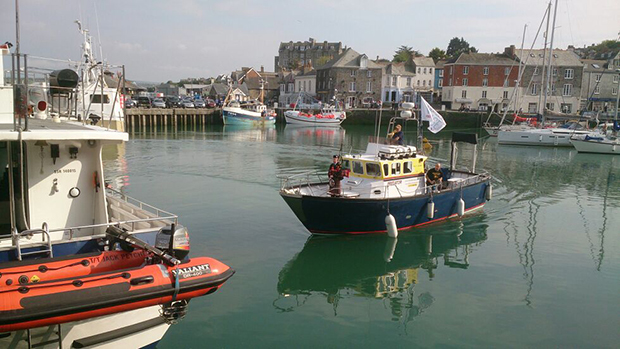 On the morning of Saturday 17th May the group representing the Padstow Community gathered outside the Red Brick Building situated alongside the harbour wall. The TS Jack Petchey had dressed ship and was looking suitably grand for this occasion. Much thanks is given to Trevor Jones, Chairman of the Padstow Royal British Legion, for making all the arrangements. Predator made a fresh entrance into the Harbour as Karl piped ashore. This led into a brief ceremony of remembrance when wreaths were laid at the two main plaques: one for VE Day May 1945, the other in memory of the loss of HMS Warwick which had been torpedoed off Padstow seventy years before.

After a speech of introduction by Trevor Jones the Mayor Councillor Charles Watson-Smyth, welcomed the Millin-Montgomery visit on behalf of the people of Padstow. After this, Chairman of D-Day Revisited, John Phipps, made a speech to explain the purpose of this coastal journey:

We thank the people of Padstow represented here today by Mayor Watson-Smyth, the Harbour Masters Office and the local branch of the Royal British Legion. From a small idea some months ago this Millin-Montgomery Voyage is a fitting tribute to all the communities along the British coast. To tell the story of D-Day and the Liberation of Europe we focus on Piper Bill Millin, a typical British soldier, a young volunteer who trained in the Highlands of Scotland at the famous Achnacarry Commando School known as Castle Commando. In 1944 Bill transferred to Portsmouth from where he departed to land on Sword Beach amongst the first waves of assault on the morning of D-Day 6th June 1944.

Using this young man as a symbol for all the British Armed Forces, we take the Pipes from Scotland to Sword Beach in tribute and respectful memory. We celebrate the courage, spirit and even the eccentricity: here was a young man who landed unarmed except for a ceremonial dagger in his sock. He was the only one of 150,000 men to land that day wearing a kilt and then in that early morning hellfire he played his pipes along the shoreline to encourage the men as they landed.

In this gathering and ceremony today, we remember all those who gave their lives for liberation and whilst we still have the opportunity to walk and talk with Normandy Veterans, we want the next generation to learn what was done for their freedom.

After the wreath laying ceremony, the party walked over to the Memorial Hall for refreshments tea, cake and pasties! This was very welcome and generously provided by the Padstow RBL. 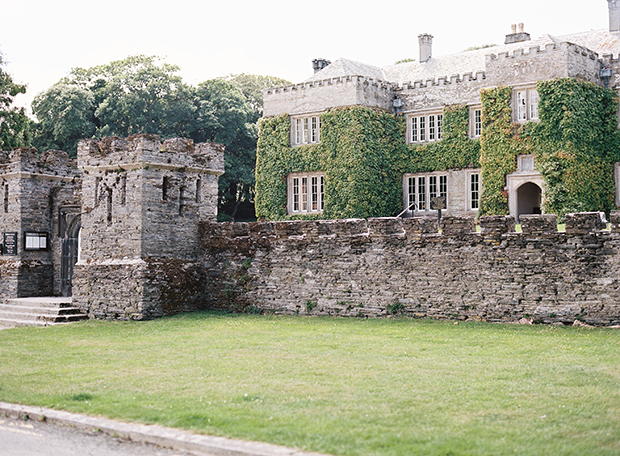 To close the visit to Padstow, the Millin-Montgomery Party accompanied by Padstow Royal British Legion members, walked up the hill to Prideaux Place. Here we were welcomed by the House Manageress, Carmen Hocking. The group assembled on the front lawn, causing some interest to the coach party of German visitors who seemed delighted to be faced with this spectacle. As Karl fired up his Pipes, the group of veterans marched across the lawn up to the monument known as the Temple where a wreath was laid in honour of the men of the 21st Combat Engineers Battalion who had been based at this historic Manor House during the preparations for D-Day, the Invasion of Europe.

Afterwards, Mrs Elizabeth Prideaux-Brune greeted the veterans and was especially interested to speak with Karl who was pleased to play a special request in front of the main entrance. 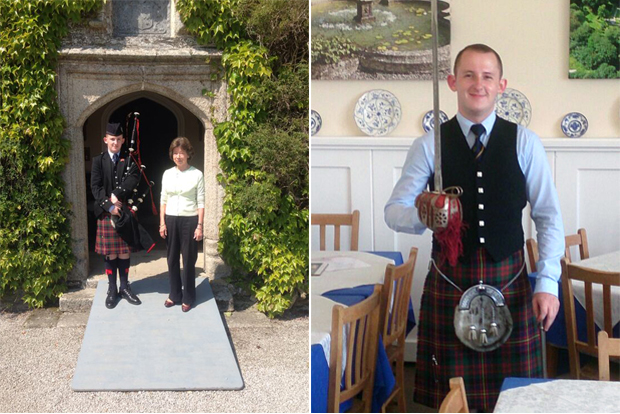 The following day, Sunday 18th May, in a more private visit the Millin-Montgomery group returned to Prideaux Place by special invitation. This included Karl and Eamonn accompanied by John & Edwina Phipps. Greeted once again by Carmen, we toured the servants quarters of the Manor House, seeing rooms which had been left untouched since the departure of American troops in 1944. It was here that we made acquaintance with Corporal Lawrence A. Bekelesky, unveiling an extraordinarily moving story of a young American GI who trained in Cornwall for about six months to eventually find his last resting place overlooking Omaha Beach in Normandy. 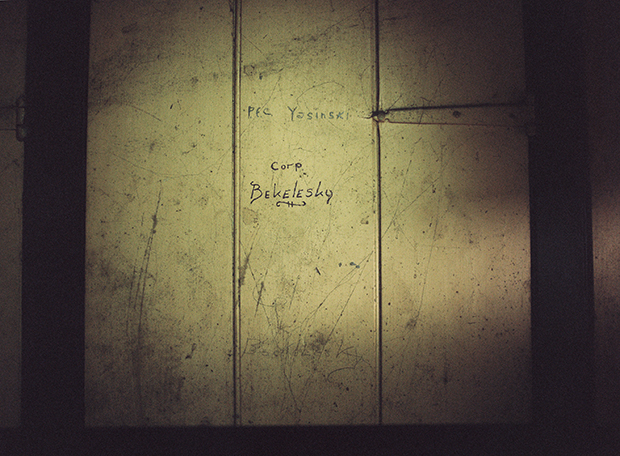 It seems the Americans arrived on the evening of 28th November 1943. Company B, about 150 strong, drove up the main driveway causing the owners to dive under the kitchen table, thinking the Germans had invaded. The Commanding Officer, Lieutenant Colonel Robert Ploger, presented John Prideaux-Brune with a Requisition Order for use of the Manor House as his base for an indefinite period. Accordingly, the servants quarters were quickly rearranged and handed over along with all the outbuildings. In all, forty rooms were allocated to Officers and Sergeants Mess, along with lecture rooms, stores and canteens. Enlisted men were mainly billeted in the outer buildings across the cobbled courtyard. The household staff was already reduced due to the war effort so everyone quickly came to make the best of the situation.

That Sunday, the current owner, Peter Prideaux-Brune, introduced himself to our small group explaining that he wasnt born until four months after the Americans had left but that his older sister, Widgy, remembers their presence and exciting treats of candies offered by the GIs. Peter is quite sure the officers must have been entertained to dinners with his parents in the 1592 Dining Room, most likely with the visiting Americans providing food and provisions unseen in Padstow for several years. The Combat Engineers spent their time in intense training. Being the ones who would have to clear the invasion beaches of obstacles, Peter Prideaux-Brune explained theirs was akin to a suicide mission. The 1962 film The Longest Day depicts graphically the task of the US Combat Engineers, especially on Omaha Beach which was the most heavily defended. As it happens, of those billeted at Prideaux Place, one in three was killed in action. 51 of these 150 men failed to return home. 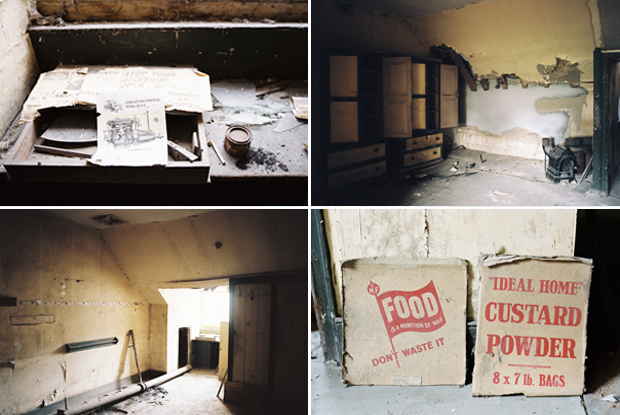 Carmen showed our small group the rooms used by the GIs exactly seventy years ago, all now dark and dusty. Obviously there has been deterioration and some essential repairs to roof and walls here and there, but essentially we were able to see the spaces occupied by those young men so many years ago. In one room we saw a short row of wooden lockers; on one there was a name inscribed in hard pencil: Corp. Bekelesky. This is where the story started as Carmen went on to explain this young man had been killed during the assault on Omaha Beach. What a journey; many of the Engineers were of European heritage so we guessed Bekelesky was a Polish family name. In fact we discovered later he was from Ohio. The Division had trained at Fort Meade near Washington DC and sailed on 5th October on the Cunard Liner RMS Queen Elizabeth from New York to Gourock in Scotland. From there the Division was moved by train to Tidworth Barracks in Hampshire, then Paignton in Devon and finally into Cornwall.

In thanking Carmen for her generous hospitality and the time taken to provide such a fascinating tour, it became a challenge then to follow Corporal Bekelesky on the rest of his journey. For the purposes of this Millin-Montgomery Remembrance Voyage, here was one example of the hundreds of thousands of American troops who crossed the Atlantic Ocean to join this allied fight for freedom. What an extraordinary experience it must have been for them, as young men to come to a foreign land so far away from their homes, living amongst us and managing our differences. By focusing on one GI, we could show our respects for all those North American Allies who fought and died together.

To read the next chapter in the tale of the Millin-Montgomery Voyage click here:
CHAPTER 8. The Channel Coast Ports of Embarkation