THE CHANNEL COAST – PORTS OF EMBARKATION

Happily the Skipper of TS Jack Petchey, Colin Watkins, had agreed to take Karl and the Millin-Montgomery Pipes on the next stage of the coastal Remembrance Voyage. Accordingly, as the tidal gate opened early on the Sunday morning, Karl played the Little Ship out of Padstow Harbour. With a new compliment of cadet trainees on board, the Jack Petchey headed for the Scilly Isles, then onwards to Falmouth. 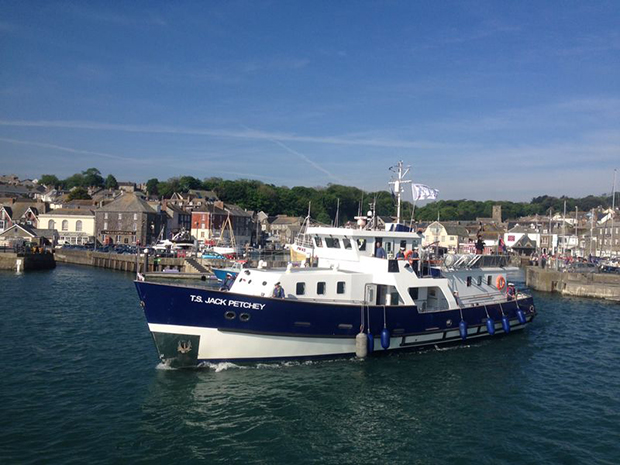 On Tuesday afternoon 20th May the TS Jack Petchey entered Falmouth Harbour, piped up to the Maritime Museum pontoon, as usual by Karl with the Millin-Montgomery Pipes in good tune. An arrangement had been made with the Museum Curator, Ben Lumby, to visit in celebration and commemoration of the part which Falmouth played as the most western port of embarkation for the D-Day invasion. After ceremonies here which went down well with the assembled public, the Jack Petchey went to its berth at the Port Pendennis Marina. By arrangement Karl and Eamonn visited the famous King Harry Ferry and piped across the estuary. This was enjoyed by all aboard and by passing yachts and river traffic. 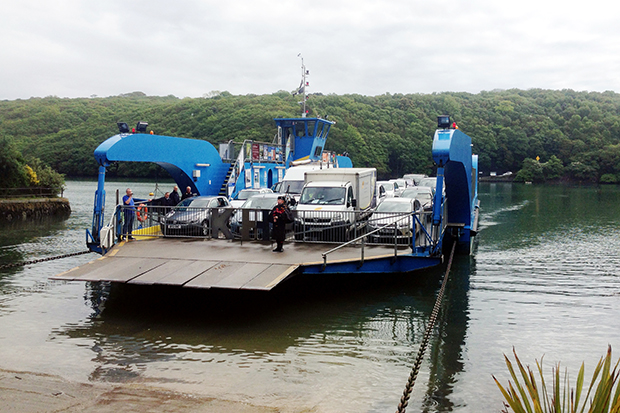 After a really successful visit to Falmouth, Karl piped the TS Jack Petchey out of harbour at 0900, heading for the historic harbour of Fowey. Skipper Colin had helpfully agreed to take the Pipes through to Plymouth which was his end destination for the current Training Course. Eamonn motored ahead so that he could meet with the Tourist Officer in Fowey Harbour.

From previous discussions and a personal visit, contact had been made with Harbour Master, Captain Paul Thomas, and with the Fowey Royal British Legion whose building is close to the main harbour wharf. 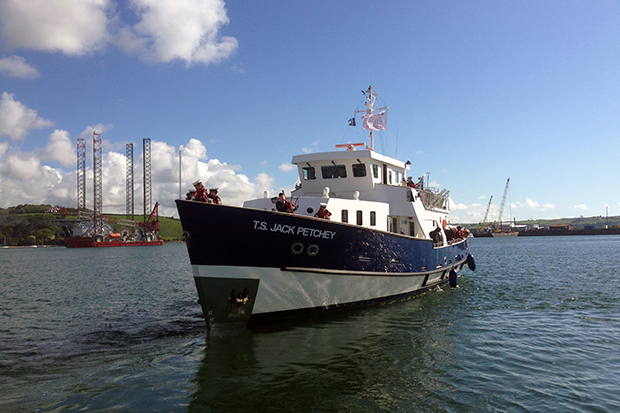 On arrival into Fowey estuary past the blockhouses, Karl piped into harbour in front of a large crowd. The TS Jack Petchey tied up at the Lifeboat Pontoon where Karl disembarked. A remembrance ceremony was then carried out at the wharf alongside the D-Day Commemorative Plaque.

In an early morning departure Thursday 22nd May, Karl played the Jack Petchey out of harbour. In good conditions the Little Ship entered Plymouth Sound early that afternoon. In recognition of the serious damage caused across the region by flooding, no arrangements had been made for an onward connection from Plymouth. Karl piped up to Plymouth Hoe and was then motored to shore using the on-board RHIB. We said goodbye and thank you to the TS Jack Petchey, the crew and the cadets, but of course most especially to Skipper Colin Watkins.

Karl played along the shore at the Hoe and at the Drake statues.

Unfortunately it wasnt possible to find a suitable passage across to Salcombe. Plymouth harbour was in busy preparation for the Bank Holiday weekend so Eamonn decided upon the final cheat and travelled to Salcombe by road. It was disappointing to leave such a primary Port without securing some sort of ceremony or tribute yet it was accepted, with attention focused on forthcoming plans in Salcombe where John Carpenter of the Royal British Legion had brought arrangements together.

Sunday 25th May. Having arrived into Salcombe the previous day, an arrangement was made at the RNLI Station to take Karl out into the estuary during the early morning so that he could make a fitting grand arrival for the planned ceremony.

By prior arrangement with the Salcombe & District Royal British Legion, it had been agreed to conduct a memorial service at Whitestrand Quay. This is an annual ceremony which takes place every 4th June in commemorative tribute to the US 7th Beach Battalion which was based in Salcombe and who set off from this quayside that day in 1944. 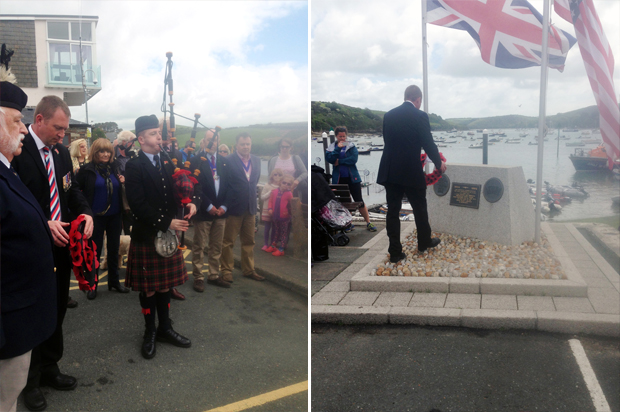 Karl set off on the serving Lifeboat at 10.30. After a circuit around the local harbour area, the Lifeboat turned back towards Whitestrand Quay as Karl piped the boat to the quayside. Once disembarked, the ceremony took place with quite a crowd of local people gathered. A prepared wreath was laid for the men of the 7th Beach Battalion. In attendance was Royal Navy Normandy Veteran, Don Reynolds, who had served on HMS Virago in bombardment support of the Sword Beach landings. Don, aged 89, had driven down the previous day accompanied by his daughter, Elizabeth.

An arrangement had then been made with Simon Evans for the historic Lifeboat, Samuel & Marie Parkhouse which had been in wartime service in Salcombe, to take Karl around to Dartmouth. Shortly after the wreath laying ceremony, Skipper Mike called Karl aboard and he piped the elderly Lifeboat out of harbour to the delight of the local crowd. 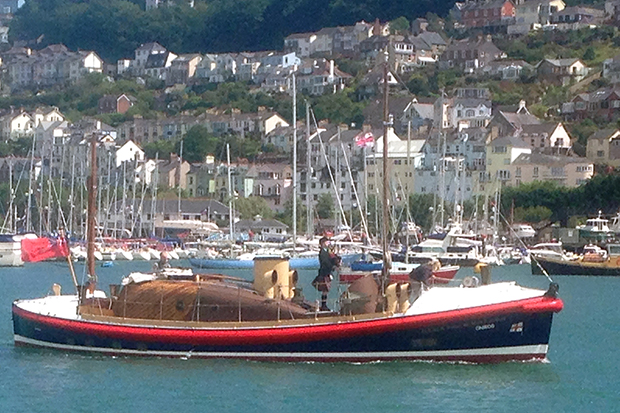 In the meantime Irving Locker (US Utah Beach Veteran) had unfortunately suffered a flight delay from Florida. On invitation from D-Day Revisited, Irving and his wife had hoped to attend the ceremony at Salcombe but in the crossing from Heathrow to Devon missed it by a couple of hours. Happily, Irving was able to visit Whitestrand Quay that afternoon and inserted a card into the wreath to record his own message. Irving had been based in Devon prior to D-Day and this was his first time back in seventy years. It was naturally a very moving time for him, and also for his wife, Bernice.

That afternoon, Karl entered Dartmouth Harbour on board the Samuel & Marie Parkhouse and was welcomed by a large crowd of tourists as he piped the Little Ship to the Town Jetty.

Monday 26th May. With the morning free, D-Day Revisited had arranged a visit to the Dawlish Museum. This is the home of the original D-Day Pipes which were played by Piper Bill Millin during the landings on Sword Beach. It was indeed fitting for this Millin-Montgomery Voyage to grasp this opportunity to bring the two sets of Pipes together. 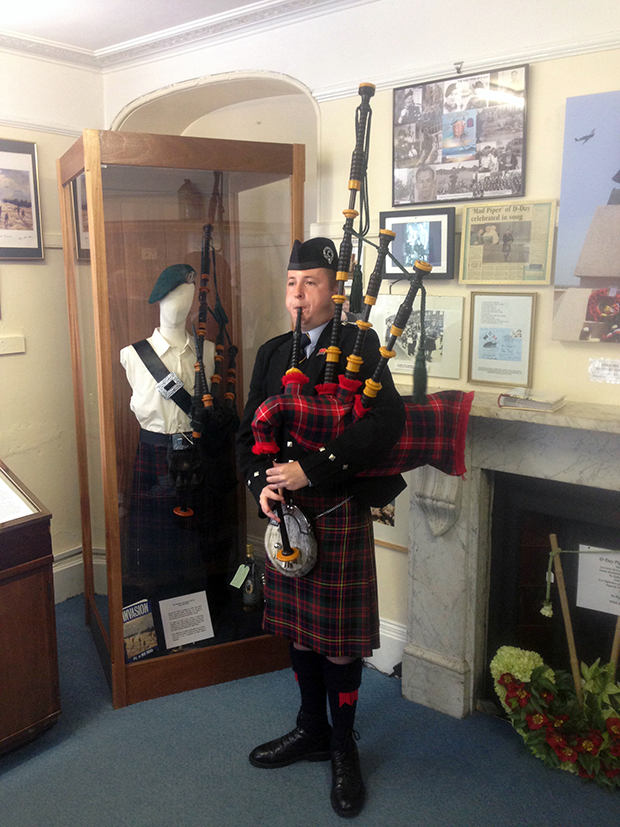 Accompanied by Eamonn, Karl was welcomed by Liz Botterill on behalf of the Dawlish Museum which opened especially for this visit. This would also be quite meaningful for the Millin family as one more way in which the link can be woven together in tribute to the whole D-Day Story. This visit was attended by members of the local Press, Museum visitors and invited guests.

To read the next chapter in the tale of the Millin-Montgomery Voyage click here:
CHAPTER 9. Dartmouth: Tribute to the 946 of Operation Tiger