DARTMOUTH: TRIBUTE TO THE 946 OF OPERATION TIGER

The 26th of May was a fine Bank Holiday Monday, with a fairly clear sky and calm sea conditions. The former WW2 Harbour Defence Vessel, Fairmile, had been chartered for the afternoon to take the party out of Dartmouth Harbour along the coast to Slapton Sands. For this special anniversary charter there were more than 50 on board as Karl played the Millin-Montgomery Pipes to the delight of the onlooking crowd gathered along the promenade water front. As the Skipper, John Ford, steered the Fairmile through the harbour entrance out into Lyme Bay, the D-Day Revisited Chairman, John Phipps, made a speech of welcome from the flybridge. 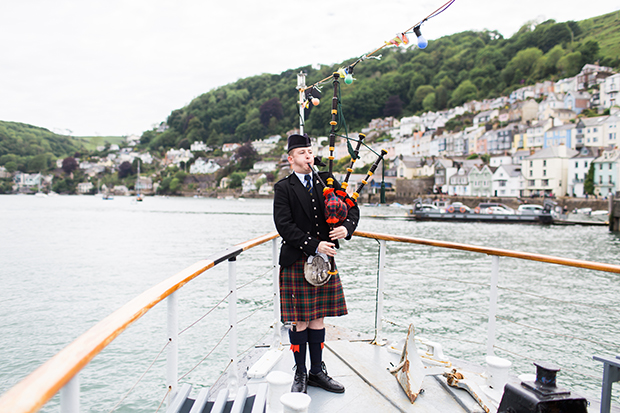 After welcoming the dignitaries and representatives as listed above, John drew particular attention to the true VIPs of this days tribute

I want to introduce you to our two veterans of Operation Tiger; one British, one American: Don Reynolds who served with the Royal Navy on the Destroyer HMS Virago and Irving Locker who landed on Utah Beach on D-Day at La Madeleine and served with the United States 116th AAA Gun Battery. As well as having taken part in the Normandy Landings, both of these men were here in Lyme Bay seventy years ago we welcome you, Don and Irving, and we recognise that we are privileged to be in your company on this occasion. 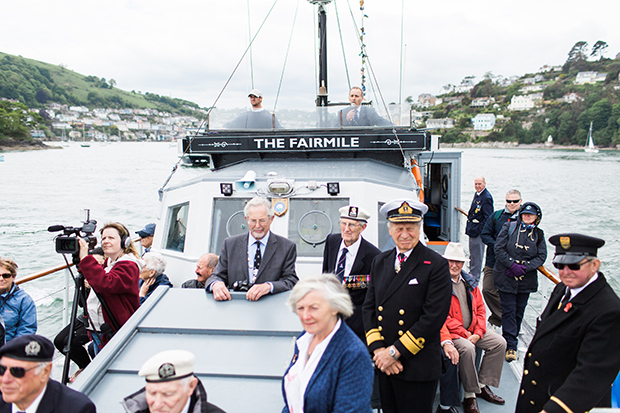 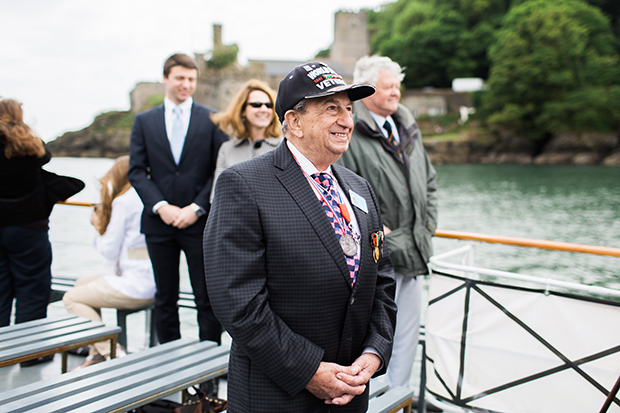 It is fitting also that we are on board this veteran vessel which also saw service in World War 2. As we head for Slapton Sands, there is an opportunity to make our point very clearly. In welcoming the US Naval Attach, Captain David Stracener, here to represent the American people, I am very pleased to see the family as well, especially Andrew and Megan. Looking at Irving Locker and Andrew standing together on the foredeck it is an easy comparison Irving is 89 and Andrew is 19 both American. So we can take ourselves back those 70 years and see Irving the same age as Andrew, then we can ask Mum & Dad if they can imagine their boy here in Lyme Bay, under fire, in training for the big Event in Normandy just a month on.

This sea trip today is within the schedule of our Millin-Montgomery Anniversary Voyage as we make our way from the Highlands of Scotland to Sword Beach in Normandy. Operation Tiger was of course part of the D-Day preparations. I will hand you over to the Skipper shortly; he will play a recording which explains the details of what happened here seventy years ago the tragedy of Slapton Sands. When we reach the beach memorial, there will be a wreath laying at the waters edge. Thinking of the quantity of lives lost, there has always been an uncertainty and the nearest we can establish comes from the study made by Ken Small in his accredited book ‘The Forgotten Dead’. To pay fitting tribute to the 946 American lives lost, the Royal British Legion has provided us with 946 individual poppies. At the appropriate moment, we would like you each to take a handful and scatter these on the water as Fairmile slowly moves along the shoreline.

Thank you all for your attendance here today. 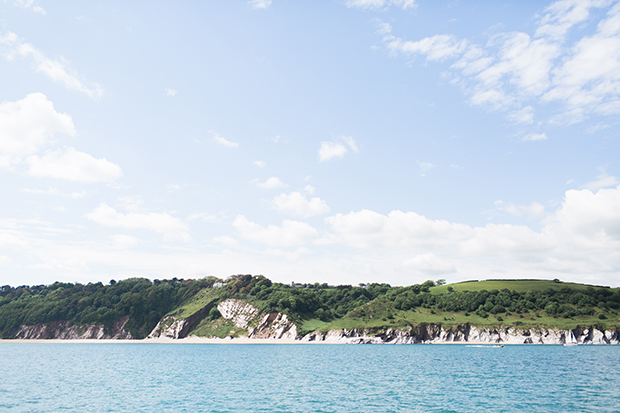 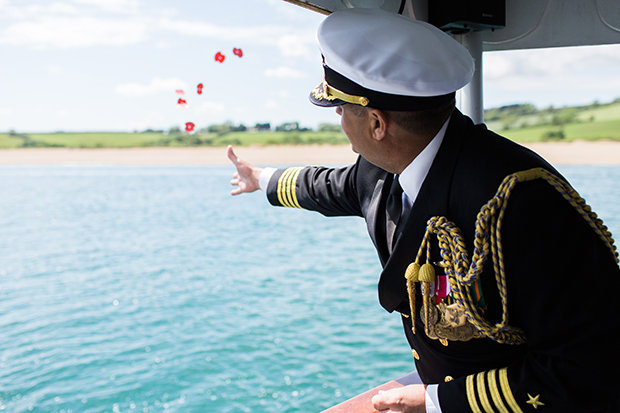 After the ceremonies, the Fairmile headed back to Dartmouth. All on board commented how fortunate we were with the weather and calm sea conditions. In fact there were quite a few people on the beach: sun bathing, walking and generally enjoying themselves in the early Summer sunshine. As the vessel approached the river entrance, John Phipps took to the flybridge microphone once again; this time to explain the link with Padstow in Cornwall where the pipes had visited just days before.

As the Millin-Montgomery Voyage has made its way along the Channel coast, we are of course visiting the ports of embarkation used by the US Armed Forces seventy years ago. When the Voyage arrived into England from Wales, we spent a weekend at Padstow in Cornwall where we visited Prideaux Place, the wartime base for 150 men of the 121st Combat Engineer Battalion, 29th Division US Army. During our visit we were given a guided tour of the rooms where these young men were billeted, noting all that area of the Manor House remains unchanged to this day. We were shown a room in which Corporal Lawrence Bekelesky had written his name on the door of a small locker.

On 24th April 1944 the Battalion left Prideaux Place as suddenly as they had arrived 6 months earlier. The owners, Mr & Mrs John Prideaux-Brune had their suspicions of what lay in front of these young men, wondering how many would survive. Lawrence Bekelesky was amongst the Battalion as they came here to Slapton Sands to take part in exercises codenamed Fabius and Tiger. Weve paid our tribute here today and commemorate the loss of 946 lives but we know that 24 year old Corporal Bekelesky was not one of those. Having survived these exercises, the Battalion was subsequently held in Blandford Dorset then later transferred to Weymouth where they boarded Landing Ship 408 on 3rd June ready for departure the following evening. After the 24 hours of delay ordered by General Eisenhower, Corporal Bekelesky was in the first wave to land on Dog Green of Omaha Beach at around 0730 on D-Day 6th June. The others in the Battalion landed later, Company A at 0750 and Company C at 2300 hours.

Of the 150 men billeted at Prideaux Place in Padstow, 51 were killed in France. Many, like Lawrence Bekelesky, were killed on Omaha Beach on D-Day morning. The first assault by Company B took 50% casualties with the loss of 75% of equipment, yet the Combat Engineers eventually succeeded in gathering equipment strewn on the beach to clear an exit, turning the Omaha landing into a success. For this, the Battalion was awarded a Presidential Unit Citation and the French Croix de Guerre.

In about ten days time Irving and Don will be with the veterans group visiting the American Colleville Cemetery overlooking Omaha Beach. There we will find the last resting place of Corporal Lawrence Bekelesky and lay a wreath, recognising one young man to represent all those who came from America to join the allied effort to liberate Europe. 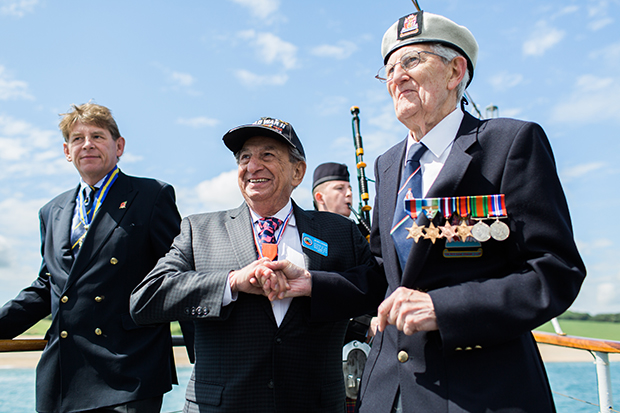 A number of people and organisations deserve thanks for their part played in all arrangements for this moving ceremony at Slapton Sands and they are as follows: 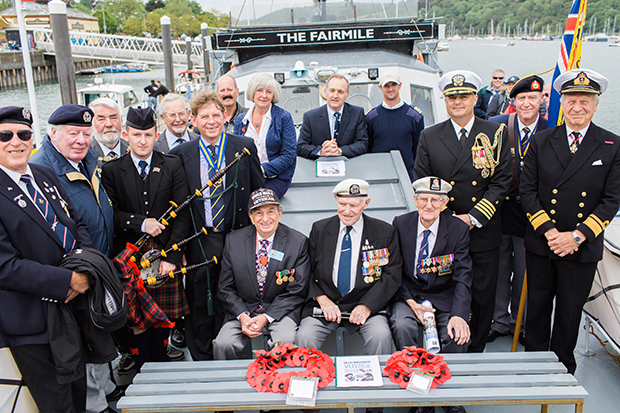 Thanks also to Kate Rousseau for this short film documenting this tribute to those young soldiers who lost their lives in this tragic training exercise at Slapton Sands:

To read the next chapter in the tale of the Millin-Montgomery Voyage click here:
CHAPTER 10. The Last Stage Arrival into the Historic Dockyard of Portsmouth