Despite all preparations and the massive build up of forces, Allied Commanders were starkly aware of the monumental challenge being faced - that a crossing of the English Channel with an invasion force had not been managed since William the Conqueror 900 years earlier. Although the vast assembly of ships, aircraft and troops was ready, it could only be hoped that deception was complete and the enemy remained unaware of the imminent armada approaching its heavily fortified coast.

By May 1944 alarming reports began to reach the Allies that Germans were reinforcing Normandy. Three months earlier Monty’s Intelligence was able to estimate the enemy had no more than six Divisions in defence of that Sector. However, by the middle of May it seemed there would be eight Divisions, with another four due by D-Day + 2. It was known that Field Marshall Rommel, famously nicknamed the ‘Desert Fox’, meant to halt and defeat the Invasion on the beaches. 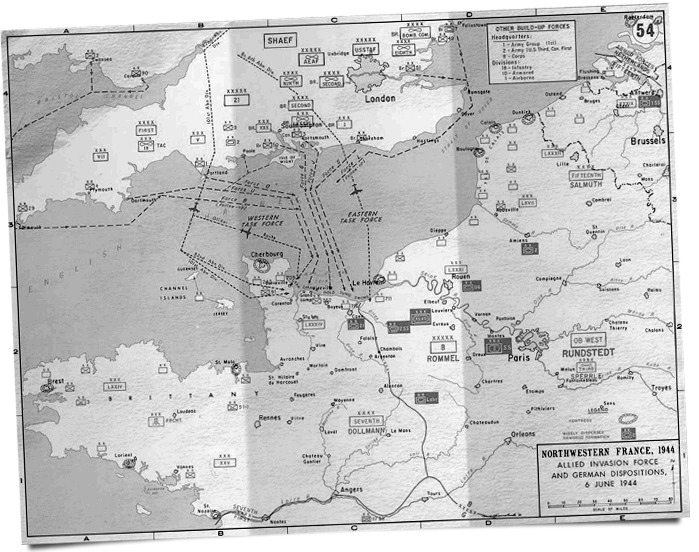 The invasion assault was to be centered on Normandy – on five beaches. The careful co-ordination of troop assembly and movement was a critical nightmare of accurately timed logistics. Ships carrying fighting men, tanks, weapons of all kinds, vehicles, equipment, fuel, food and every imaginable type of support material were gathered in English ports stretched from the Thames Estuary in the East right along the Channel to Falmouth in the West.

Strongly dependant on the tide and weather, the night of 4-5 June 1944 was chosen as the attack date. As bad weather moved in at the last minute, the invasion was postponed for 24 hours and tens of thousands of soldiers, many of whom had already embarked, held their breath.

The invasion had to happen between the 5th and 7th of June in order to benefit from the right conditions of the moon and tide. Darkness was needed when airborne troops went in, but moonlight once they were on the ground. If this narrow time slot was missed, there would have been a further delay of at least two weeks.

Accurate weather forecasting was critical and an essential part of the decision making process. Information on air temperatures, sea conditions and wind movement in the Atlantic was gathered by special flights and balloon deployment. With men and machinery packed aboard every available vessel ready to set off from ports all along the English Channel Coast, along with all the co-ordinated efforts of airborne landings waiting for the green light…the invasion was postponed.

On the evening of 3rd June, Eisenhower and the Combined Chiefs of Staff listened to the weather report given by Group Captain J. M. Stagg. The decision to wait was confirmed in the early hours of 4th June. All involved then anxiously awaited the next meeting that evening. Though by no means ideal, the next day’s forecast was marginally better. Eisenhower and the Combined Chiefs of Staff knew the secret could not be kept and a postponement at this stage would mean disembarkation and a review two weeks later.

At a final meeting at 0415 hours on 5th June, Eisenhower listened to the updated weather report, then he took the final gamble, rose from his seat and announced: 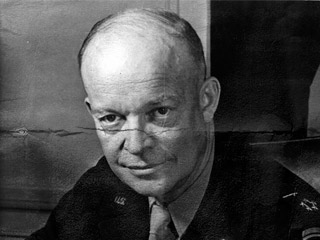 And so – the biggest sea and airborne invasion went ahead.

Airborne landings took advantage of a landing by glider and parachute in darkness, whilst the Paratroopers then had the advantage of moonlight to better identify their objectives.

Despite a rough crossing, the weather abated enough to permit the beach landings which indeed caught the enemy by surprise. Operation Fortitude had been successful, with invasion expected at or near the Pas de Calais and in more favourable weather conditions.

By 13th June conditions permitted Prime Minister Winston Churchill to set foot on the Normandy beaches. He crossed in the Destroyer HMS Kelvin and went ashore by DUKW at Arromanches, receiving the cheers of British & Canadian soldiers as well as citizens of the liberated town. 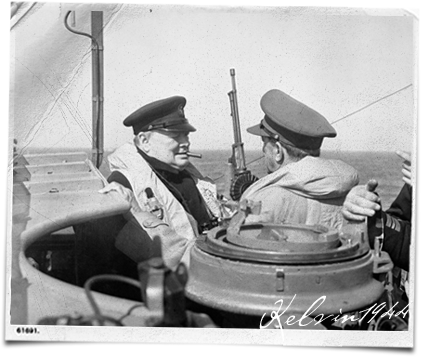 Churchill enjoyed a lunch at General Montgomery’s Headquarters now inland at Creully. Monty was Land Forces Commander for Operation Overlord. The lunch was filmed for posterity by the South African Prime Minister, Field Marshall Smuts. On leaving, with Winston Churchill on board, HMS Kelvin joined in the coastal bombardment – fulfilling the Prime Minister’s ambition to be aboard one of Her Majesty’s warships in action against the Enemy! 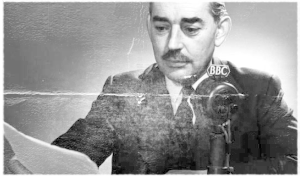 That evening, the BBC Newsreader John Snagge was finally able to announce: “D-Day has come”