Just as the British landing beaches at SWORD & GOLD, and mainly Canadians at JUNO, needed to secure strategic crossings through paratrooper action during the night, American Airborne forces landed in the hinterland of OMAHA & UTAH beaches. The daring but ill-fated landing in the town square of Sainte Mère Eglise was carried out by the US 82nd Airborne Division. 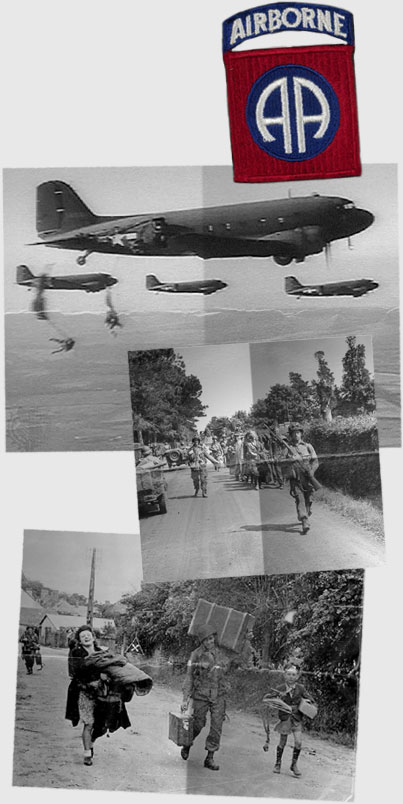 However, despite all set-backs, by 04:30 on the morning of 6th June the Stars & Stripes flag was flying proudly over Sainte Mère Église which became the first town in France to be liberated.

During the first few months of 1944 there were quite a number of allied air raids on and around this small town; the night of 5th June was initially thought by the enemy garrison not to be any different. As it happens a prominent house in the town square caught fire, most likely the result of one or more flares dropped by the Pathfinder squadron.

As is shown in vivid scenes in the 1962 film, ‘The Longest Day’, the townsfolk formed a human chain passing buckets of water filled from the pump in the square. At this point, with all the people busy, parachutists from the 82nd Airborne Division along with a few scattered units of the 101st began landing in and around the town. Soldiers of the German Garrison opened fire and ordered the locals back into their houses. Despite significant losses, the town was taken by members of the 505th led by Lieutenant Colonel Edward Krause.

In this odd quirk of fate, the town has been made more famous by John Steele. This story has caught the imagination, knowing that one of these men was stuck helplessly on the side of the church tower throughout the intense ground battle, witnessing the fighting below for two hours. After repelling this first stage of the attack, members of the German Garrison took Steele prisoner but were later forced to release him to the Americans. An effigy of John Steele is maintained to this day, hanging on the church tower. Inside the church there are two stained glass windows, one shows the Virgin Mary surrounded by paratroopers; the other shows St. Michael (patron saint of the paratroopers) and was dedicated in 1972.

Fighting continued around the town until 7th June by which time tanks and supporting troops from UTAH Beach had arrived in sufficient strength to properly secure the area.

Today, outside the Town Hall of Sainte Mère Église is a pink marker stone depicting “Kilometre Zero”. These markers were put in place by the French Government in 1946; each Kilometre along the route taken by the Free French 2nd Division led by General LeClerc.

In the town hall are the Stars and Stripes, flown over the town each year to respectfully commemorate the day of liberation. On UTAH beach there is another Kilometre marker showing KM00. This marks the liberation route taken by those who landed by sea, rather than by parachute. Mindful of this difference, the nearby small town of St Marie du Mont can rightly claim to be the first village or town to be liberated… but by troops landing by sea.

Sainte Mère Église is a favourite venue on and around 6th June every year. Veterans and visitors crowd the town square in a festive spirit. Veterans of the D-Day Landings and the ensuing Liberation are the visiting celebrities. Bands play, the Square is filled with local people milling around with tourists from many countries - parades are impromptu with bagpipes playing and drummers drumming… lots of beers and tears as the memories come flooding back.