After the experiences of the Dieppe Raid in August 1942, planners had come to the conclusion that it would be impossible to secure an existing functioning Port on the Normandy Coast. Therefore, in planning and preparing for D-Day, the allies included the pre-fabrication of two floating harbours – one for the American Landings to be situated off St Laurent and the other in support of British & Canadian Landings off Arromanches.

It was partly their awareness of the lack of harbouring which led the German High Command to be sceptical of an attack on the Normandy coast. For the allied plan to be free to ignore the need to capture a working harbour, allowed much more room for manoeuvre in planning. 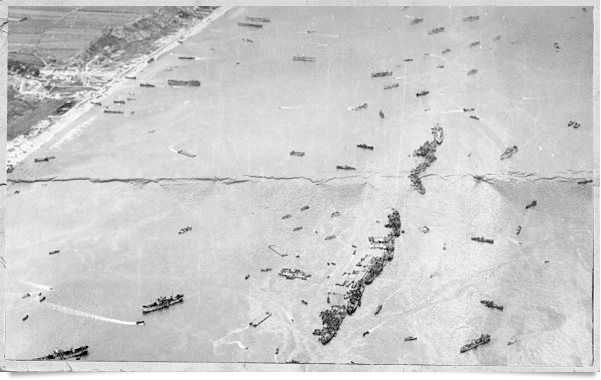 The design concept had a number of roots. The codename ‘Mulberry’ was simply the next available in a long list of possible code-names, so this has no significance. In 1917, when Winston Churchill was First Sea Lord during the Great War, there had been a plan for the capture of two small islands of the Dutch coastline and to use flat bottomed barges mixed with manufactured caissons to form an artificial harbour. Events moved on quickly and the idea was abandoned, yet no doubt still kept in mind for a future demand.

Investigations were started in deep secrecy as far back as 1941, looking at various ways to construct such a moveable harbour. In common with the wide and varied development of the D-Day idea, it was the civilian population and engineering capabilities in Britain which rose to the challenge of such a grand construction. As theories grew and ideas came forward, there are stories of dispute and argument between the Allies, with British and American plans differing wildly. Amongst the oddest of these is the ‘Queen Mary Demonstration’:

Whilst crossing the Atlantic to a meeting with the Americans in Quebec, Admiral Mountbatten called his team into a bathroom on board where a bath had been part filled. Floating on the bath water were 40 or so ships made out of newspaper. The most junior officer present, Lt Commander Grant RN, was directed to make waves using the back of a bath brush. Of course the paper vessels all sank as a result. The demonstration was then repeated with the paper warships placed inside the protective ring of a ‘Mae West’ lifebelt. Mountbatten then gave the command: “More waves please Lieutenant Grant.” All the senior naval onlookers were then pleased to see that all ships remained afloat!

Once the allied commanders had reached agreement, the order was given to Mountbatten’s Combined Operations to deal with practicalities the idea and bring it to fruition. As the task proved too big for the limited resources available, the project was contracted out to the War Department to get the attention needed.

Prototypes and much of the early fabrication work was carried out at ‘the Morfa’ in Conway, North Wales. Over 1,000 men were employed to make progress with the immense construction task.

Once enough sections were prepared, these were floated up the coast to Garlieston in Wigtown Bay, near Dumfries in Scotland. This harbour and bay area had been identified as a suitable test beach given that it offered characteristics similar to those of Normandy – flat, sandy, remote and quite sparsely populated. A security cordon had been established, with local inhabitants moved away. The whole area from Garlieston through to the Isle of Whithorn was declared off limits. A military camp was constructed nearby at Cairnhead to accommodate the hundreds of engineers and support workers needed to construct, test and develop the Mulberry Harbour. 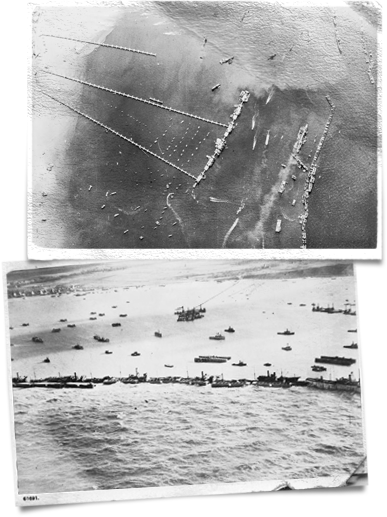 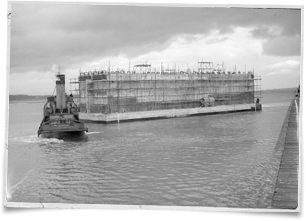 Once designs were agreed, the final scale of construction was in danger of over-stretching industrial capacity, especially with so many other demands placed upon resources. From the summer of 1943, construction began in earnest employing up to 45,000 personnel. The bulk of this work was carried out on the River Thames & River Clyde, using existing dry dock facilities. Pier heads and buffers (roadways) were built at the Conway Morfa site and trials continued at Garlieston as the project developed and grew. Each of the two harbours would feature two breakwaters made from hollow steel reinforced concrete. To fill the gaps, up to seventy obsolete merchant vessels and warships would be sunk strategically as blockships (codenamed “gooseberries”) for extra protection against storm damage.

The military requirement was for a mile long pier which could withstand gale force winds and be capable of berthing large freighters and troop carriers. To achieve this, each artificial harbour would need to be the size of Dover which had taken more than seven years to build. The same would have to be built off the Normandy coast in just seven days, whilst under heavy enemy fire!

Each quay would have to be linked to the beaches by floating roadways in order to allow rapid offloading of material needed to maintain momentum at the front. It was calculated that each of the two harbours would have a capacity to handle 7,000 tons of supplies each day.

Sea going tugs were used to tow the ‘mulberries’ from their assembly point near Lee-on-Solent over to the French coast. This cross Channel movement was designated as “Operation Corncob” and commenced on 4th June. As a result of the postponement, the transit was held up for 24 hours and tugs were forced to hold their position mid-Channel.

Once the invasion was under way, markers were in place for Mulberry B, off Arromanches, to be positioned and assembled. Prepared blockships left Poole Harbour on their final voyage to be scuttled in pre-arranged positions to protect against high seas and fast tidal movement. Similarly, Mulberry A was being set up off Saint Laurent-sur-Mer.

To construct the artificial harbours, breakwaters were formed by partially sunken blockships and concrete caissons. Closer to shore a long jetty was formed of Lobnitz Pierhead units connected to the shore by floating pontoons known as “Whales”.

On D+1 (7th June) the first caissons were brought into position. Blockships were scuttled and the huge ferro-concrete caissons were towed to within a mile of the shoreline by a fleet of tugs. By 13th June Mulberry B was established to the extent of providing two crescent shaped harbours which could accommodate up to seventy five Liberty ships and smaller craft.

All Mulberry components were given code-names to maintain security.

Bombardons - floating breakwaters comprising huge, metal, crucifix shaped structures ballasted and firmly anchored in place. They were the outermost barrier; the first line of defence against the rough seas.

Phoenexes - 146 concrete caissons, each 60 metres long, 18 metres high and 15 metres wide making up 6 miles of breakwater. They were airtight floating cases open at the bottom with air-cocks to lower them to the seabed in a controlled fashion. Around 2 million tons of steel & concrete were used in their construction.

Gooseberries - 70 obsolete merchant vessels (block ships) were amassed at Oban on the west coast of Scotland, stripped down, ballasted and primed with explosive scuttling charges. These vessels made the journey under their own steam and were sunk in 5 locations, including the 2 Mulberry harbours.

Pierheads were located at the seaward end of the roadways. Each stood on four legs called (Spuds) with a platform that could be raised and lowered with the tide by means of electric winches. 23 were planned for of which 8 were spares.

Buffer - approach span from the floating roadway to beach.

Rhino - power driven pontoon on which cargo was brought ashore. 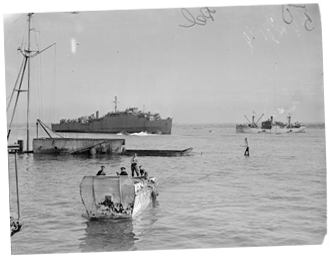 Without the Mulberries, capture of a working port would have been essential to maintain momentum of the invasion and advance into the hinterland. Without a strong and reliable supply line, any military advance would quickly falter and collapse, with troops inevitably being forced back into the sea. It would be Dunkirk repeated. Beyond this, by skilful and fast establishment of this novel harbour construction, the Allies could avoid predictability.

A brief appraisal of headline quantities shows the vital contribution made by the Mulberry Harbours. Even ignoring the heavy equipment, vehicles, tanks and weapons, a typical serviceman would need 6½ pounds of supplies per day to keep him effective in the field.

On D-Day 6th June over 150,000 men landed on the five beaches. That’s well over 400 tons of supplies needed per day just to look after them. By the time Operation Neptune ended, over a million men had landed in Normandy; that’s a demand of 3,000 tons of consumable supplies per day! As the majority of vessels were incapable of beach landing, a secure harbour was essential, with a roadway link directly in to the transport and distribution system on land.

What did the Enemy think of the Mulberries? After the war, Albert Speer, the great architect of German defences and manager of the forced labour, Todt Organisation, said:

“To construct our defences we had in two years used some 13 million cubic metres of concrete and 1½ million tons of steel. A fortnight after the Normandy Landings, this costly effort was brought to nothing because of an idea of simple genius. As we now know, the invasion force brought their own harbours, and built, at Arromanches and Omaha, on unprotected coast, the necessary landing ramps.” 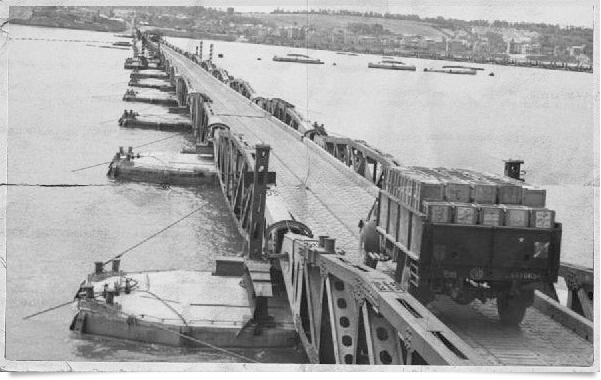 Around these completed elements which made up the artificial harbour, ships and smaller craft could come and go in large numbers in an area of approximately two square miles, equal to that of the harbour of Gibraltar.

On 19th June 1944 a fierce storm broke up most of the American Mulberry Harbour. Given urgent demand, structural elements were quickly removed to more valuably extend the British Mulberry at Arromanches; this was affectionately nicknamed “Port Winston” by the troops.

Despite the loss of Mulberry A, the massive harbour effort was a resounding success. Once landings had been effected and a beachhead secured, it was found that both main Ports of Cherbourg and Le Havre were so badly damaged that neither could be used effectively for at least 6 months.