In its preparations for D-Day the task for the Royal Air Force was primarily one of developing and growing resources. It is a massive story to which justice cannot be given in these few introductory pages.

The War started with British Military Power at a very low standing. Throughout the 1930s the political emphasis was on avoidance of conflict. This fell into the policy of appeasement on which Churchill famously commented:

By the late 1930s the latent industrial power of Britain began to be mobilised for the war effort. Happily some vitally important preparations had already been put in place during the pre-war period.

After the evacuation from Dunkirk in May 1940, the new Prime Minister took over and immediately mobilised the British Bulldog Spirit as a vital war weapon. It was a moment for a Leader…and Winston Churchill stepped forward – his appointment confirmed by the King on 7th May 1940. 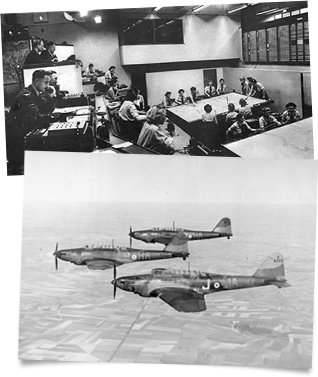 Sydney Camm’s Hawker Hurricane and RJ Mitchell´s Spitfire are perhaps the best remembered. Many other modern aircraft types were either already in service or were brought into service as air force strength steadily grew in preparation for D-Day.

The Vickers Wellington Bomber, designed by Barnes Wallace of Dam Busters fame, was built in increasing numbers and was used to assist the Royal Navy in defence of Western Approaches, patrolling sea lanes and attacking u-boats when found on the surface. Of course aircraft was only part of the RAF need; many airfields were constructed, with all their technical support structures. To establish and protect the Atlantic Bridge, airfields were built in isolated communities of South West Wales and the West Country. In valuable support of the RAF, the Polish & Czech Air Forces were equipped with Wellington Medium Bombers and based at Talbenny & Dale. Pembroke Dock became the biggest facility in the world as it grew to accommodate the huge Seaplanes which patrolled Western Approaches.

To react forcefully to the dire national situation in May 1940, one of Prime Minister Churchill´s first acts was to establish the Ministry for Aircraft Production. As First Minister he put Lord Beaverbrook in charge. In response, Beaverbrook brought his dynamic personality to bear upon the challenge and was able to prioritise industrial efforts to aircraft production. Somewhat unfairly, this Ministry took precedence for some time over other demands and Beaverbrook always kept targets at least 15% out of reach of what was reasonably possible for British Industry to achieve. 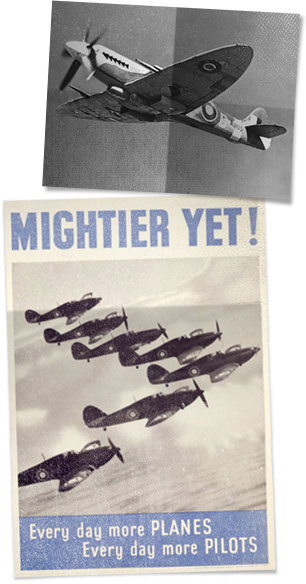 Just as the Luftwaffe needed air superiority in 1940 for their planned invasion of Britain, the Allies needed command of the air before the Normandy Landings could be considered. The new aircraft available to the RAF had quality, but quantity was needed. Once designs were set, the British Government built Advance Factories around the Country so that proven aeroplanes could be delivered in quantity.

The Vickers Factory at Broughton/Hawarden near Chester was one such facility, employing over 6,000 people on its production line, mostly women. Opened in 1939, the Broughton Factory was responsible for fabricating over 5,000 Wellington Bombers, peaking by 1942 at a rate of 130 aircraft per month. Similarly, the Castle Bromwich factory in the West Midlands was responsible for producing the most Spitfires – over 12,000 by June 1945. The factory had been established by Lord Nuffield of Austin/Morris Cars but taken over by the Ministry of Aircraft Production at the end of May 1940. Under new management, the factory went from producing 10 Spitfires in June 1940 to 23 the following month, then 56 during September. As the largest Spitfire factory in the United Kingdom, production peaked at 320 aircraft per month, making it the most successful Plant of its type during the 1939-45 war period.

Pilot training was a paramount requirement, typically conducted in the North to be safely away from combat areas. The Air Force was the new technical service. To reliably keep aeroplanes in the air and ready for duty, the whole huge network of support was essential. Resource was built quickly, bringing into play all military and civilian skills. To preserve pilots for combat and training duties, more and more women pilots were used in the Air Transport Auxiliary (ATA) for delivery of new aircraft to the airfields, ready for duty.

It can be seen that all was organised together to build resource for D-Day. The United States had become the armoury for the Allies; raw materials, components and aircraft in part assembled form were shipped across the Atlantic. Rolls Royce ´Merlin´ aircraft engines were manufactured by Packard under licence. High octane aviation fuel using the new alkylation process developed by BP was shipped from America.

Bomber Command played a vital role in depleting the enemy’s industrial strength. The Lancaster Heavy Bomber was introduced in early 1942, bringing its huge bomb-load to improve effectiveness of regular night time sorties over the Ruhr and Industrial heartlands of Germany. The arrival of the American Army Air Force in 1942 added daylight bombing to further damage the war capabilities of the Axis Powers. Bombing strategy was closely supported by reconnaissance use of unarmed Spitfires and De Havilland Mosquitoes flying high and fast, fitted with the latest photographic equipment.

As RAF strength increased, increasingly applying new sciences to improve speed and altitude capabilities, air superiority over the English Channel and French Coast was gradually achieved. Quality and quantity were needed to reach this stage, whilst at the same time the RAF was committed to all other distant theatres of a world war.

Prior to D-Day, essential deception continued and Allied bombing raids were twice as heavy around the Calais area compared with the real landing target. In the few weeks leading up to D-Day in April & May 1944, a great allied air sweep across Northern France had succeeded beyond expectations. 1,500 of the 2,000 railway engines of Region Nord were immobilised. The whole region had become a “railway desert”, carried out with such skill the enemy remained steadfast in belief the attack would come from the Pas de Calais.