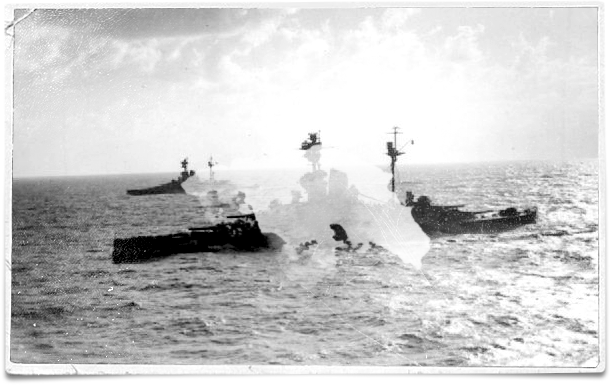 A great deal needed to be done before the Invasion could be launched. It was vital to secure the Atlantic Crossing before the millions of men armed with tanks, guns, planes, trucks, bullets, bombs, fuel, spares, rations and mountains of other supplies and equipment could be concentrated in Britain. The Royal Navy fought the Battle of the Atlantic to clear the U–boat menace which was disrupting the convoy supply system. Advancing technology of RADAR & ASDIC helped the massive effort made by both the Royal & Merchant Navies. Successful elimination of U-boat packs was helped significantly once the ENIGMA SHARK code was broken by the mathematicians at the secret Bletchley Park base in Southern England.

This hard won victory was essential if Britain was to survive as a base for the assault on Europe. It was also vital for the successful import of American and Canadian military power. Simultaneously, the maritime blockade of German controlled Europe put serious limits on Nazi war production.

The convoy system forming the Atlantic Bridge was mainly operated from the Port of Liverpool, with RN Headquarters in Derby House. Control of Western Approaches co-ordinated maritime resources to ensure that convoys were provided with appropriate warship escorts and protection. Liverpool’s Gladstone Dock was the centre of Royal Navy activities and a growing resource steadily improved the security of this trans-Atlantic link with the New World.

The Port of Liverpool became the treasured link with the Free World – America. The vast dock complex along the Mersey waterfront was strategically perfect for convoy assembly. Combined Operations, responsible for control of the Western Approaches, was moved in l941 from Plymouth to Derby House, known locally as “The Citadel”. This move was instigated personally by Winston Churchill. 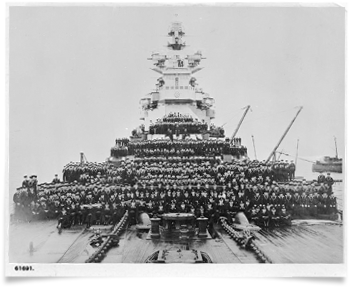 The Cunarder Queens – Queen Mary & Queen Elizabeth were both requisitioned as troop ships to carry American GIs to Britain. These huge liners had been built to compete for the fastest crossing Blue Ribbon.

With such extraordinary speed, these ships travelled alone, without convoy protection. In fact, warships often struggled to match their pace.

Major Fleet Actions took place to maintain the maritime supremacy of the Royal Navy. The breakout of the Bismarck in May 1941 caused major disruption to convoys and the order went out to sink this ship “at all costs”. A combined action of the Home Fleet from Scapa Flow in the Orkneys with Force H from Gibraltar achieved the demanded outcome.

Dreadful setbacks and huge losses of capital ships and escorts did not prevent growing supremacy on the high seas, yet it was always the U-boat threat which had the potential to starve Britain into submission. Without this steady build-up of forces on the British Isles, a planned invasion of Europe could not be possible.

As communications across the Atlantic were made increasingly secure, it was then important to dominate the waters of the English Channel. Joint naval and maritime air offensives in the spring of 1944 forced German shipping back into its harbours. This dominance allowed the build–up of Allied forces along the south coast of Britain, relatively free of naval attack or reconnaissance. It also facilitated deception policies that would do so much to assist the Allies in Normandy.

“Our task in conjunction with the Merchant Navies of the United Nations, and supported by the Allied Air Forces, is to carry the Allied Expeditionary Force to the Continent, to establish it there in a secure bridgehead and to build it up and maintain it at a rate which will outmatch that of the enemy. Let no one underestimate the magnitude of this task.” 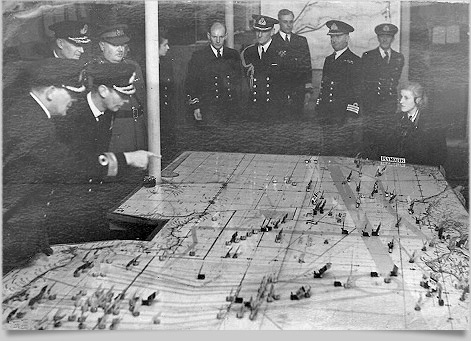 Continuing efforts to confuse the Enemy, Royal Navy mine sweepers cleared shipping lanes that would never be used. The deception, in close harmony with extensive planning, was a resounding success.

The Royal Navy played a key and dynamic part in winning the Battle of the Atlantic and the build-up to D-Day, as well as carrying out essential bombardments to destroy enemy coastal defences and effectively blockaded the English Channel in readiness for D-Day itself.